After an exceptional and exciting and 2020 field season, Beni and I are now back in Germany. In the following lines I would like to reflect on the challenges we had, the achievements we were able to accomplish and the stories we were experiencing.

As the Covid-19-Pandemic spread, it stayed unclear for a long time, if and when a field season would be possible this year. Even though sadly Tom, Alyssa and the rest of the team could not make it to Iceland, at least Beni and I were glad to arrive in Húsavík at the end of July. Tom had sent us the necessary equipment and with the help of Charla at the Research Centre of the University of Iceland we managed to get ready for the data collection. It was challenging at first to be responsible for every task, but by a mixture of talking to Tom a lot on the phone for instructions, recommendations or confirmations and by gaining confidence, this responsibility also became a great learning opportunity.

As soon as possible, we went out on the whale watching boats to gather behavioural data of the whales. We are especially excited to see whether the reduced number of boats due to little tourism during the pandemic has a significant impact on the whales. Iceland whale watching has decreased drastically due to the pandemic, however, Iceland has luckily had relatively few cases and were able to still have some boat trips during the day. On the trips not too much was different, besides required social distancing and face masks, we were still thankful to be surrounded by fantastic whales and great people! Throughout our entire stay in Húsavík we were lucky, mostly having good weather, often very clear waters and a number of humpbacks in the bay. Especially on our first trips we were encountering some very curious individuals, spy hopping and checking us out close by. A good start to the summer.

Amelie and Beni with Aleks, an intern at the University of Iceland who helped with error measurements! We had to realize soon though, that our plan to fly the drone over many humpbacks was not as feasible. In Skjálfandi Bay the whales tended to be on the western side, out of reach for our drone from land. Without a boat license for the little inflatable we weren’t able to get any closer and driving to other areas of Iceland, where whales would come closer to land, was too difficult without a car.

Instead we found a different way of collecting interesting data: twice we were taken by Captain Alli to the western side of the bay. We camped on the cliff for several days each, ate lots of wild blueberries and hiked up the local mountains. But mostly we spent the days on the cliff edge looking for whales through the theodolite. Regularly we counted the numbers of cetaceans in the bay, conducting so called “Scan Sampling”. This will be interesting data to match with our hydrophone recordings later to be able to calculate call rates (number of calls heard during a certain time divided by the number of whales in a particular area). It is a very challenging task, especially in rougher sea conditions, with glare or with drizzle over the water, to spot every individual in the entire bay. At first I thought, we must be doing a bad job, when soon we only counted two or three whales per 30 min, while in the days before the whale-watching trips couldn’t even decide where to go, having whales all around. But after talking to people on the boats we realized that they had not seen more individuals either and that a lot of the humpbacks must have left the bay. This made our second task more difficult: we tried to collect focal follows, to compare the behaviour of whales without boats to those we see from the boats. Finding a whale close enough by and without boats was more challenging than expected though. Thus, we got very excited when a few times (always during our lunch break!) we heard a “pooffff” very close by, looked over the cliff edge and saw a whale blowing right below. Obviously, we started follows immediately. Once we could even follow the white pectoral fins under the water, it was so clear! After all, being in the west was a very exciting and successful data collection time, I hope we will be able to do this a lot in the next season as well. Apart from the actual fieldwork, we spent quite a lot of time accomplishing chores. For example, we created anchors out of stone, concrete and steel (we had used existing ones for our hydrophone deployment and had to replace them) , we measured all the platform heights of the boats for Tom’s crazy analyses of whale positions, we collected data to calculate our error from the whale watching boat Sæborg twice and many more things. Tom’s to-do-list, he gave us at the beginning of the season, kept us busy. 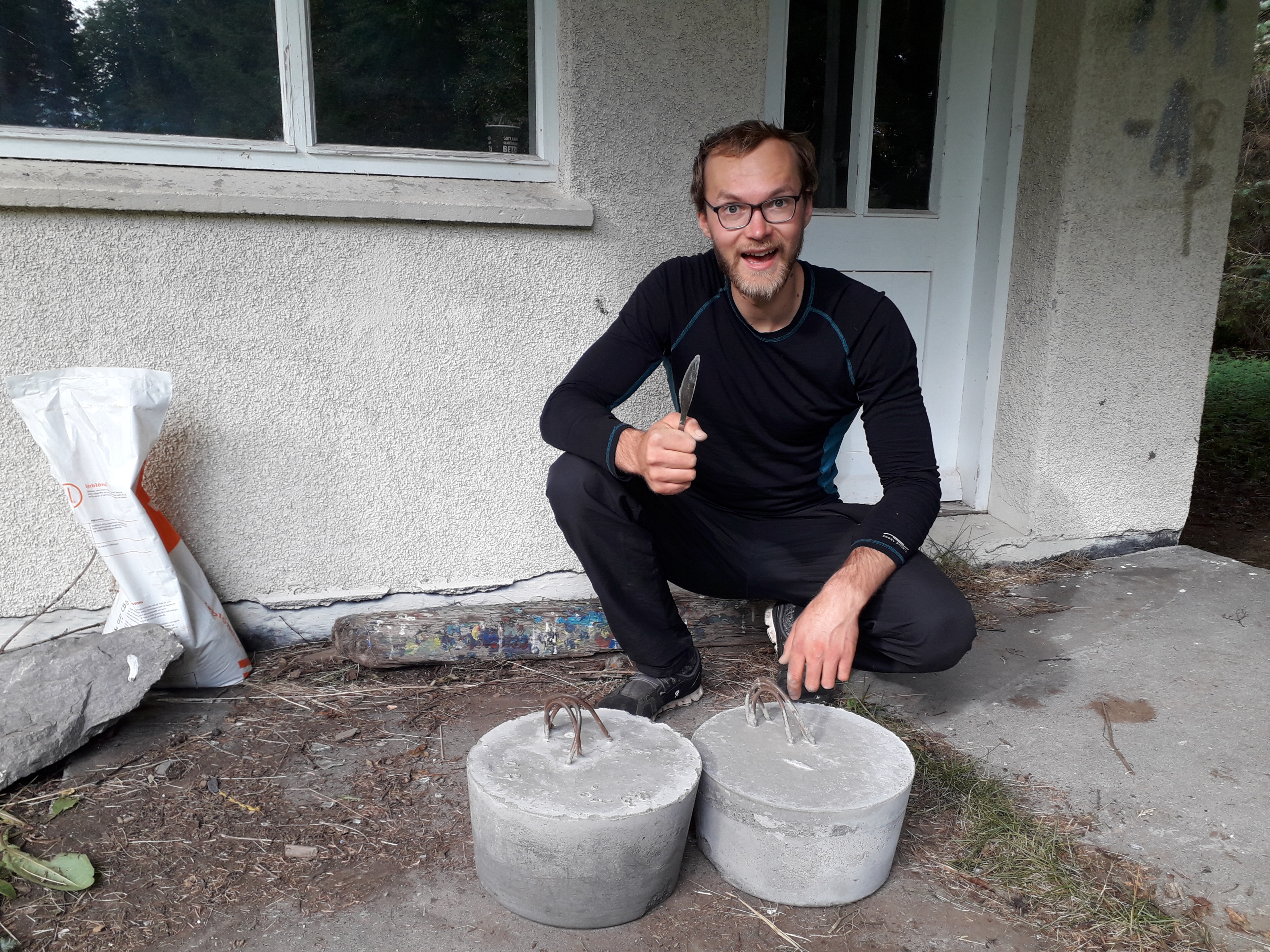 Apart from the daily research and chores, we had two unusual whale events. In the middle of August, there was a blue whale alert. Náttfari had spotted the whale. We ran to the research centre and rushed out with a few people and Captain Alli on the research boat Arcpath. We jumped over the high waves, far out of the bay, searched and looked but in the end never found the blue whale. It was already travelling quickly north when the others had seen it, so we must have come too late. Instead we saw some dolphins in the beautiful sunset. Still, an exciting adventure.

The second whale alert was more successful: orcas! At the end of August, we heard about a pod of orcas in the bay, on the only day of the season where we had had a boom trip (no whales) in the morning. Again, Alli took us out on Arcpath and far out of the bay we found the pod. I would guess around 15 animals surrounded us, their high dorsal fins announcing another skip of my heart beat every time one of them came up. Both Beni and I had never seen these whales before and were absolutely awestruck by their beauty! Not long after this amazing encounter, another very exciting boat trip interrupted our daily life. We went out with Charla, Marianne, Belén (researcher and whale watching guide) and Captain Alli to retrieve the hydrophone. It had been deployed by Charla in the middle of June and ever since I was nervous with anticipation, if the equipment would come up safely again. If not, we would not only lose expensive gear but also all the data! We arrived at the marked GPS position, dropped the transducer in the water and sent out the acoustic signal to release. And it worked!! A few moments later we collected the yellow buoys from the surface close to us, pulling in both the hydrophone and the acoustic release. Back at the computer we downloaded the data. What a relief, it had recorded for the 2.5 months continuously. By now we have already listened to some of the recordings and heard some dolphin whistles and whale moans. It is so exciting! We can now start to analyse this huge amount of data to look at ambient noise, boat noise, whale vocalization and even the blue whale and orcas that had visited us. Maybe, we might also hear the earthquakes, that happened around Húsavík in late June. In the end, this analysis will be the basis of my bachelor’s thesis and I can’t wait to work on it.

Dolphin whistles from Skjálfandi Bay! They are very high-pitched and quite difficult to hear. All in all, our field season 2020 was a challenging but also mostly fun and successful time. I’m very happy, even with so few people, that we managed to collect some data from this unusual and interesting summer!

← An adventure in the west of Skjálfandi Bay
What do you do? →