An adventure in the west of Skjálfandi Bay

Last week Beni and I (Amelie) went for a six day adventure to the other side of Skjálfandi Bay. The mountains (~1200 m), opposite side of Húsavík, full of rivers, waterfalls, cliffs, meadows and small beaches are a beautiful wilderness. A few farmers used to live there, but abandoned their houses many years ago. Now only sheep join the wildlife that roam this remote area. As the runoff from the mountains washes many nutrients into the sea, the waters in front of the mountains seem to provide the ideal resources for fish and other marine life. This may be a reason why we tend to see humpback whales a lot of the time far in the west of the bay feeding. Gathering behavioural data from these animals by whale-watching vessel is not too difficult of a task, as the boat can simply follow the whales. However, acquiring control data from the Húsavík cliffs (via theodolite) can prove difficult, as a whale 11 km away is a near impossible challenge. This, combined with the fact that our hydrophone is deployed in the west and theodolite data could be a helpful tool for analyses, we decided to spend some time camping and collecting data from this very different perspective of the bay. 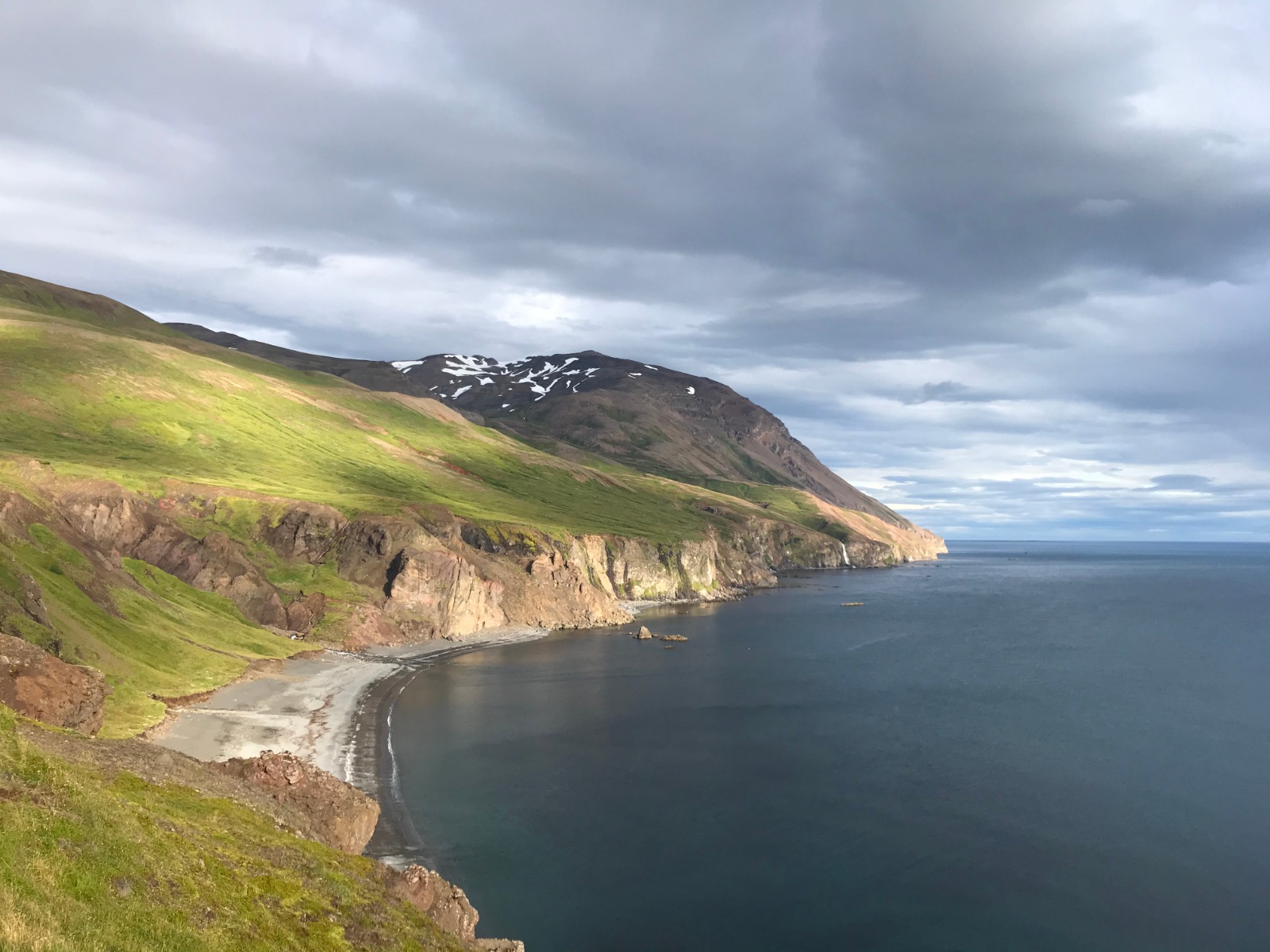 There is no road or even gravel path, to reach the isolated mountains, so the only way for us to get to our destination was by boat. Captain Alli took us on Saturday (8th August) afternoon on board our little inflatable. The way across the bay was bumpy and my butt was bruised when we arrived on the other side. The next challenge was getting off the boat and onto the little beach. Slowly we approached it, carefully, all the way until we touch the ground. Then a wave came, washed us forward, water splashed into the boat and all over the equipment. We had to be quick – I jumped off the boat into the water (soaking the only shoes I brought) and carried all the gear, including drone and guitar, into dry safety. Even though we had a challenging start to our adventure, nothing was damaged in the end. 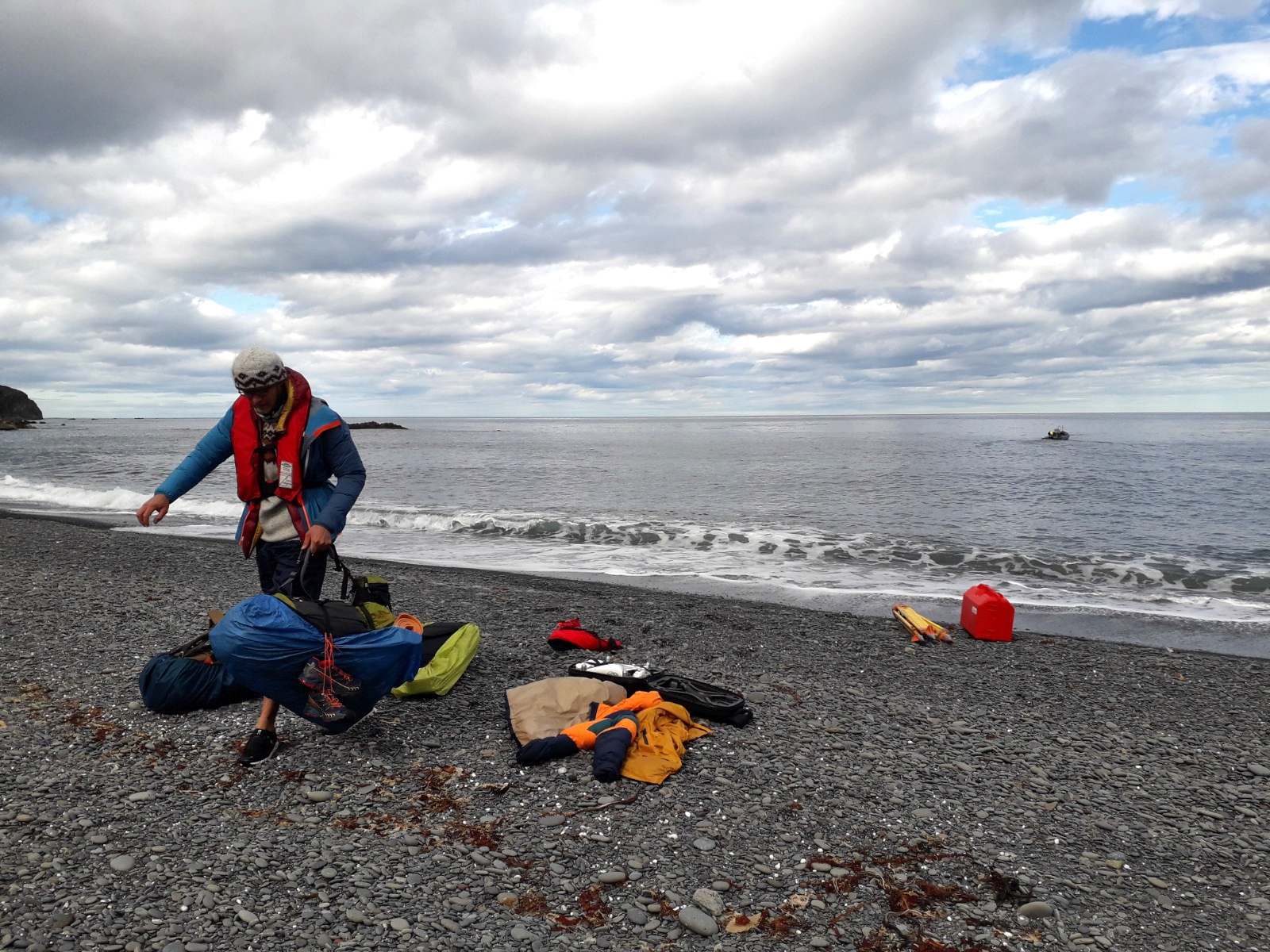 We said goodbye to Captain Alli and began our trek. After climbing the cliff and a good walk around the swamps and meadows, we found the ideal place for our purpose. A cliff, about 65m high, flat enough for camping with dry grounds and a great view all over the bay for our research. It took us a while to carry all our equipment up the steep cliff but in the evening, we had finally pitched up both our camp and our theodolite (or theo) successfully. 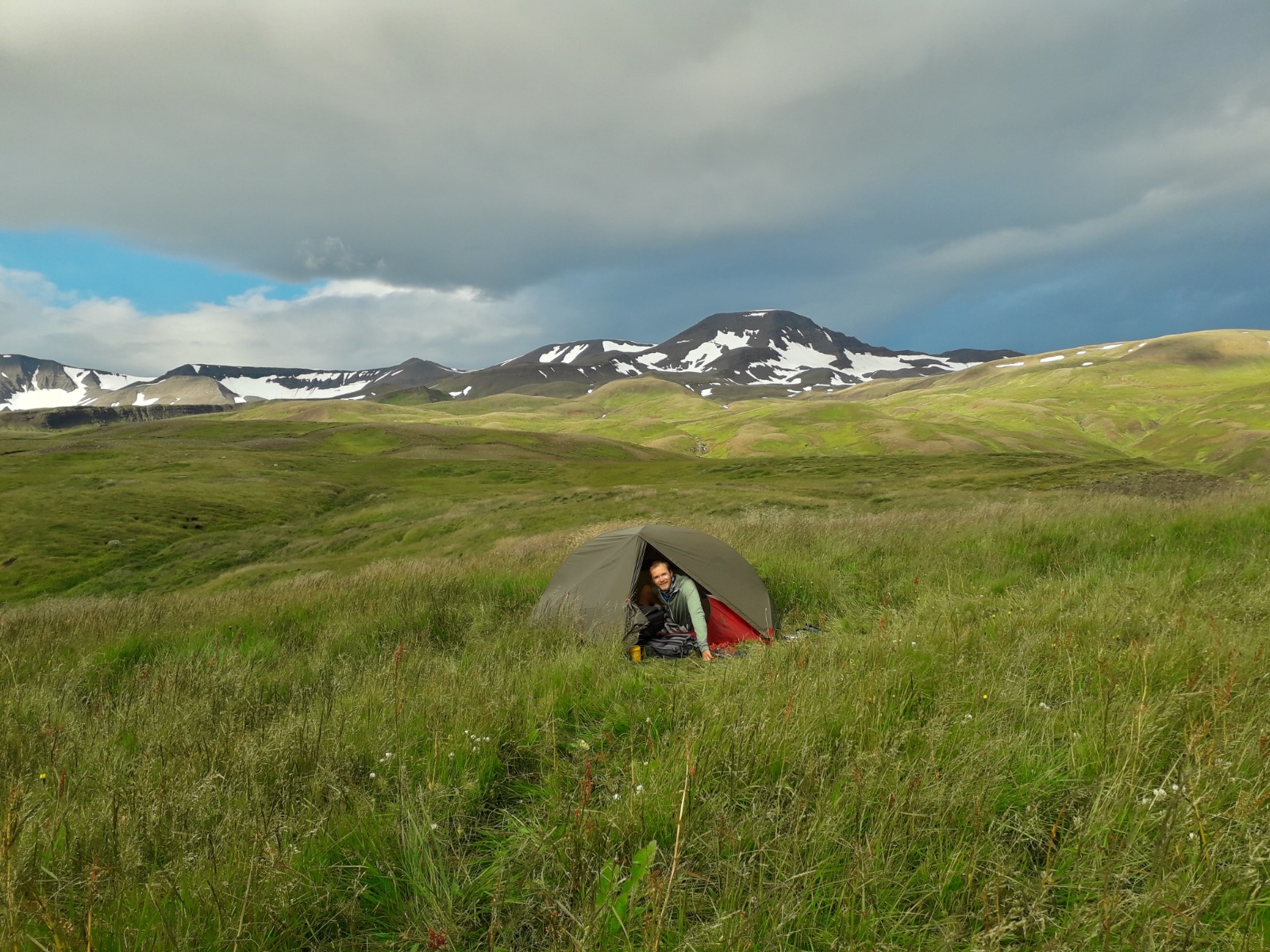 Sunday was our first day of research. We didn’t have to wait long, while eating breakfast on our mattress overlooking the whole bay we spotted two blows in the distance. Very exciting! We had created a research plan previously and started work accordingly at 8am with scan sampling. Scan sampling is a method used to get an overview of the number of cetaceans in a certain area. You set a time period, in our case 30 min, and look all around your defined area of research interest (in our case the whole bay). One observer has binoculars, mainly looking for animals further in the distance, the other one is responsible to spot backs or blows with bare eyes closer by. This observer also has the task to then make a point (from which you can calculate the GPS position later) with the theodolite of every whale seen by either observer. Obviously, the biggest task here is finding anything. However, another challenge is that every whale or group of dolphins is only to be recorded once in your time period. This gives you an overview in the end of how many cetaceans were present and approximate location in the bay at the end of your 30 min. So, you have to remember where you saw an animal before and hope you will recognize it as the same individual the next time it surfaces not to mark it again. Collecting these data is mainly interesting for the analyses of the acoustic data recorded by the hydrophone. Knowing the number of whales present in a certain time span gives you the opportunity to calculate call rates. Basically, you count the number of humpback calls you hear from the hydrophone in those 30 min and divide it by the amount of humpback whales you counted. Thus, you can calculate an average call rate per individual and compare those, for example, in the presence and absence of boats or different times of the day.

Our first half an hour was exciting, we found one pod of dolphins, one minke and five humpbacks!

Now, an even bigger challenge was awaiting us. The second part of our research is collecting focal follows. This means instead of counting all the whales in the bay, you select one animal and track it. Every time it surfaces, you make a point with the theo and record its behaviour in an app. This is the control data we need to compare to the tracks we collect of whales from the whale watching boats. As all the humpbacks were much too far away we decided to follow the minke whale that we had previously seen in our scan sampling to practise the method. The communication between the observer with the binoculars (also in charge of app and voice recorder) and the one making the points with theo had to be well practised to make sure no surfacing is missing.

The ideal schedule for our research day was to do four sessions of two hours each, consisting of 30 min scan sampling, one hour focal follows and again 30 min scan sampling. In between sessions it is important to take breaks so your eyes can relax and are ready to focus again on the water and the whales in the next session. On Sunday we had to skip one session in the late afternoon as it started to rain and our equipment cannot get wet. Apart from that, it was a quite successful first research day. We even had a good follow on a breaching humpback in the early afternoon!

We continued with this research effort for the next days. Monday and Tuesday we did full days of data collection. The weather turned out to be on our side, it became sunny and quite warm. Although, the whales decided to leave the bay for a while. While we had seen six or more whales on every whale watching trip in the days before, we now found only one or two whales in the bay per session. After being in contact with people on the boats and confirming that they also had a difficult time finding animals was helpful. We were happy it wasn’t our lack of ability to track whales from land, but that there were only few! Additionally, most of the time we saw them at quite a distance. This made finding suitable whales to conduct focal follows on very difficult. Even though it became frustrating at times to see so little, for the scan sampling this was less of a problem. Theoretically, it doesn’t matter how many whales there are in the bay as long as you count them correctly.

A few times we were very lucky though. A couple times during our lunch break, we were sitting at the cliff side, starting to cook and suddenly heard a very clear blow. We looked up and saw a humpback passing by right underneath us. We disregarded the schedule, ran to the theo and started a follow. This happened twice! It was beautiful to observe the whales so close, especially from land.

During our breaks we used the time to gather fresh water at a nearby river, eat cookies or close the eyes for a bit. In the evenings, we had dinner, played the guitar or collected blue berries. One time we hiked up a nearby mountain (it was very windy!).

On Wednesday we only did a morning research session, following a very closely passing humpback whale (that suddenly fluked twice and turned out to be two!). We used the beautiful light of the sun to drone our site and play the guitar. In the afternoon we hiked to the last still standing abandoned house called Naustavík. It is always an adventure hiking on and along those mountains. There are no trails, only sheep tracks, and a lot of the times you have to find your way across swampy areas. Crossing fields full of blue berries is very satisfactory though! 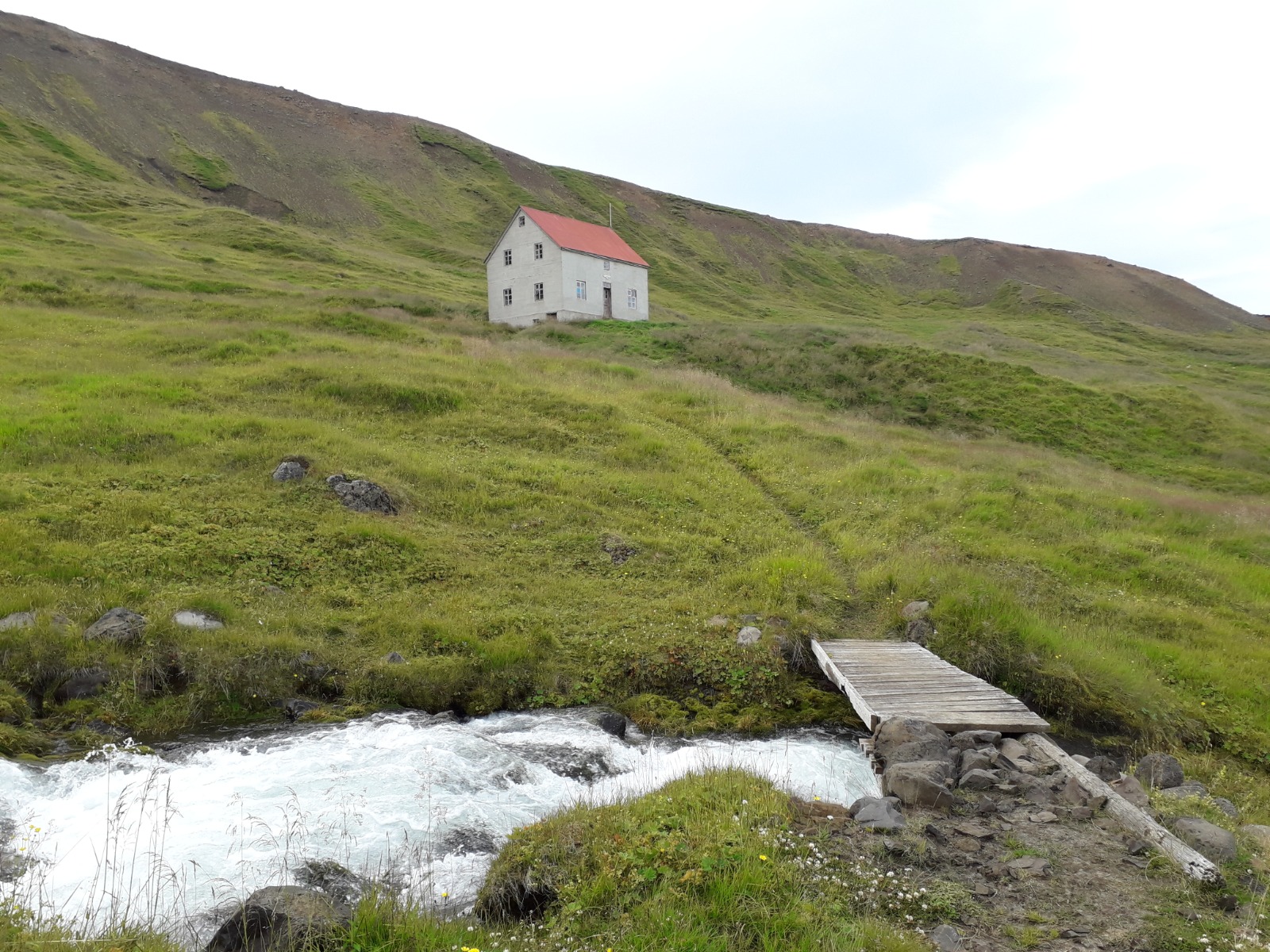 Thursday was our last day. We attempted another full day of data collection. Apart from a few scan sample sessions though we ended up spending most of our time in the tent due to quite strong wind and rain. Playing cards and eating our last food caused the time to pass quickly until we made our way back down to the beach with all our gear. Knowing that we would be in the warmth of our house soon we risked a quick swim in the 6-7°C cold ocean before Captain Alli came to pick us up again. This time he came with a bigger boat and a small rubber boat to get us and our equipment safely on board. Everything worked well and after a fun trip across the bay we arrived safely back in Húsavík that evening. Finally, we got back to the house, as desperate for a long, warm shower as we were happy to bring back quite a good amount of data!

← Rolling with the tide
An unusual 2020 field season →