The past two weeks began with the arrival of two members of the Whale Wise team, Alyssa and Abigail, late in the evening of Sunday the 16th. Their arrival meant that the main goal of our research could soon begin; blow sampling with the drone.

Of course, Murphy’s law dictated that Iceland decided to show Abigail, who is new to Iceland, just how much cloud and wind can roll into Skjālfandi Bay over the week. Although low cloud rolling over the mountains across the bay is aesthetically pleasing, the wind and rain meant we were unable to test the drone to prepare for our first sampling trip.

We spent the week collecting important behavioural data off the whale watching boats, organising data, and preparing everything we could so we would be ready to go as soon as the weather allowed. Abigail was very glad to be able to meet the great people in the Húsavík community, and of course encounter her first Icelandic whales. Alyssa felt like she had never left, which shows how at home we feel here in Húsavík when we are based here.

When Friday rolled around, we packed up the drone equipment and hiked up to the local lake, Botnsvatn, to ensure the drone and its batteries were all functioning well, and to test flying it with the new 3D printed petri dish frame.

The drone proved to be working well and ready to go, and Abigail was happy with the test flights. We then attached the frame and launched the drone, excited to see the result. 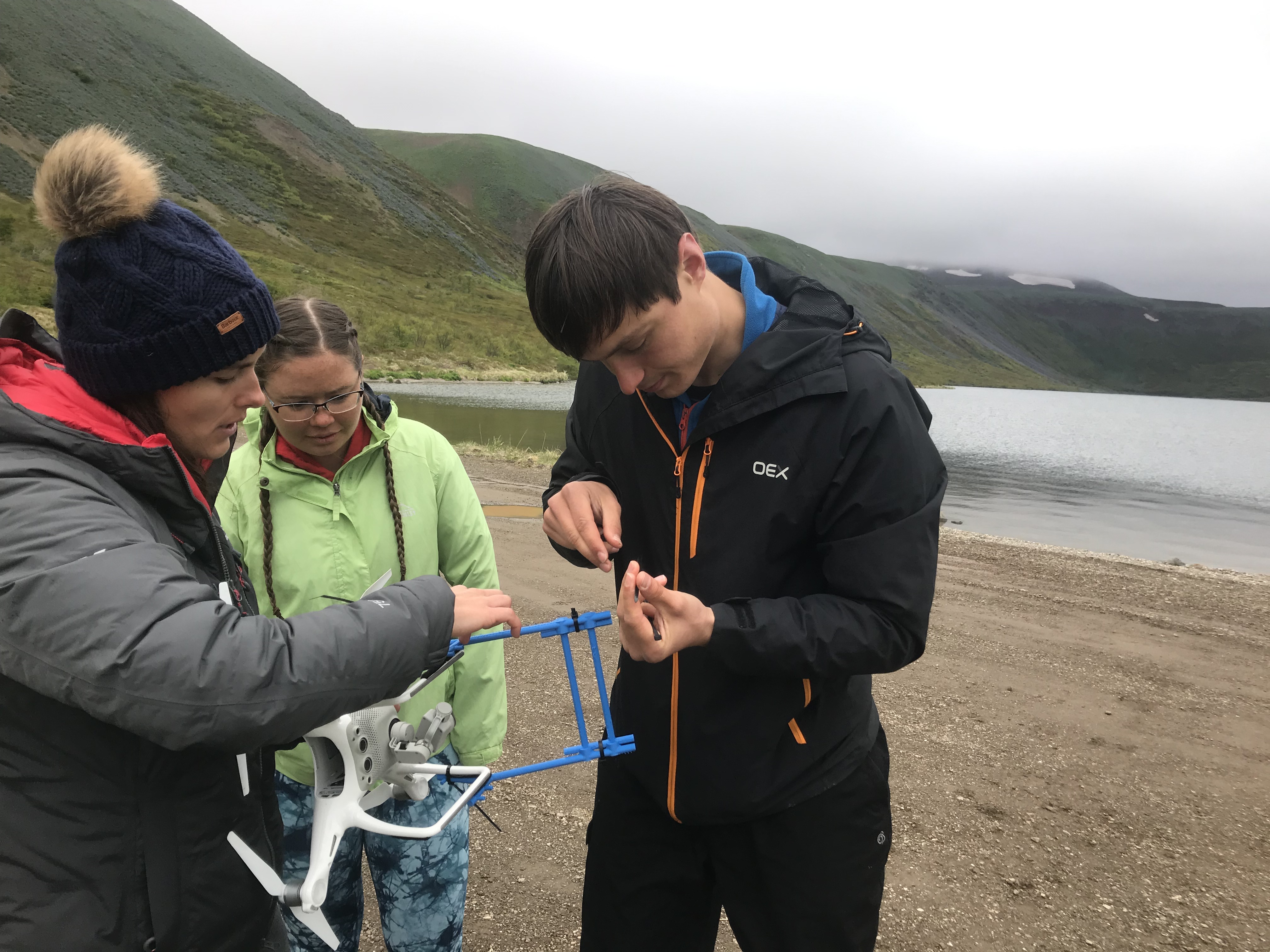 From left: Abigail, Flordespina and Tom. Attaching the petri dish frame to the drone. Photo by Alyssa. 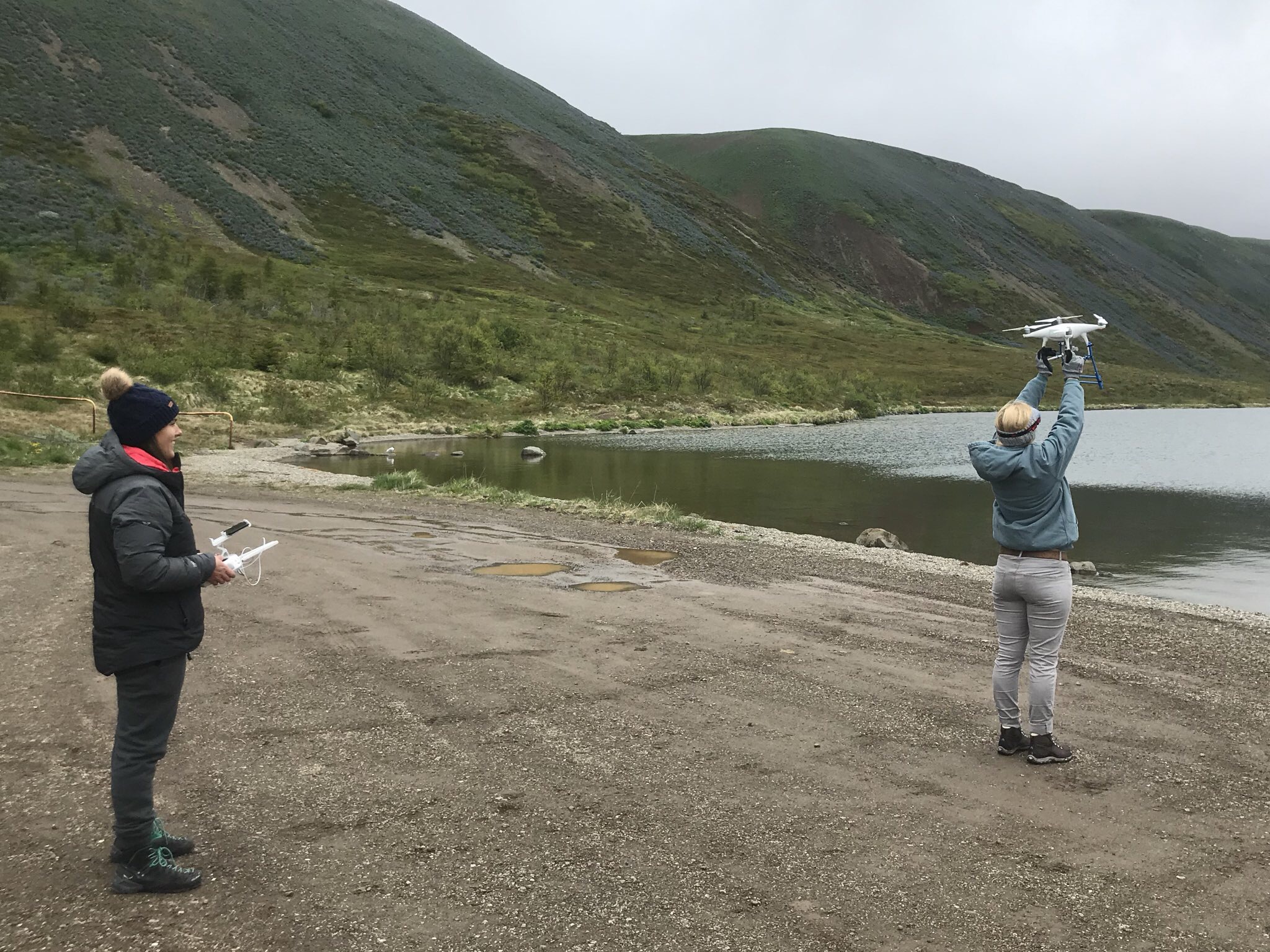 Abigail and Alyssa launching the drone for the test flight. Photo by Flordespina.

Unfortunately, the frame essentially was too flexible and started to wobble, which in turn, gave the drone speed wobbles. However, this is all part of the fun of experimental research, so we headed home to tackle the problem.

The solution was to use our tried and true method. Cut up coat hangers. We used them to brace the bottom of the frame against the drone, reducing its ability to accumulate momentum and wobble. With bated breath, we launched the drone again to see what happened. 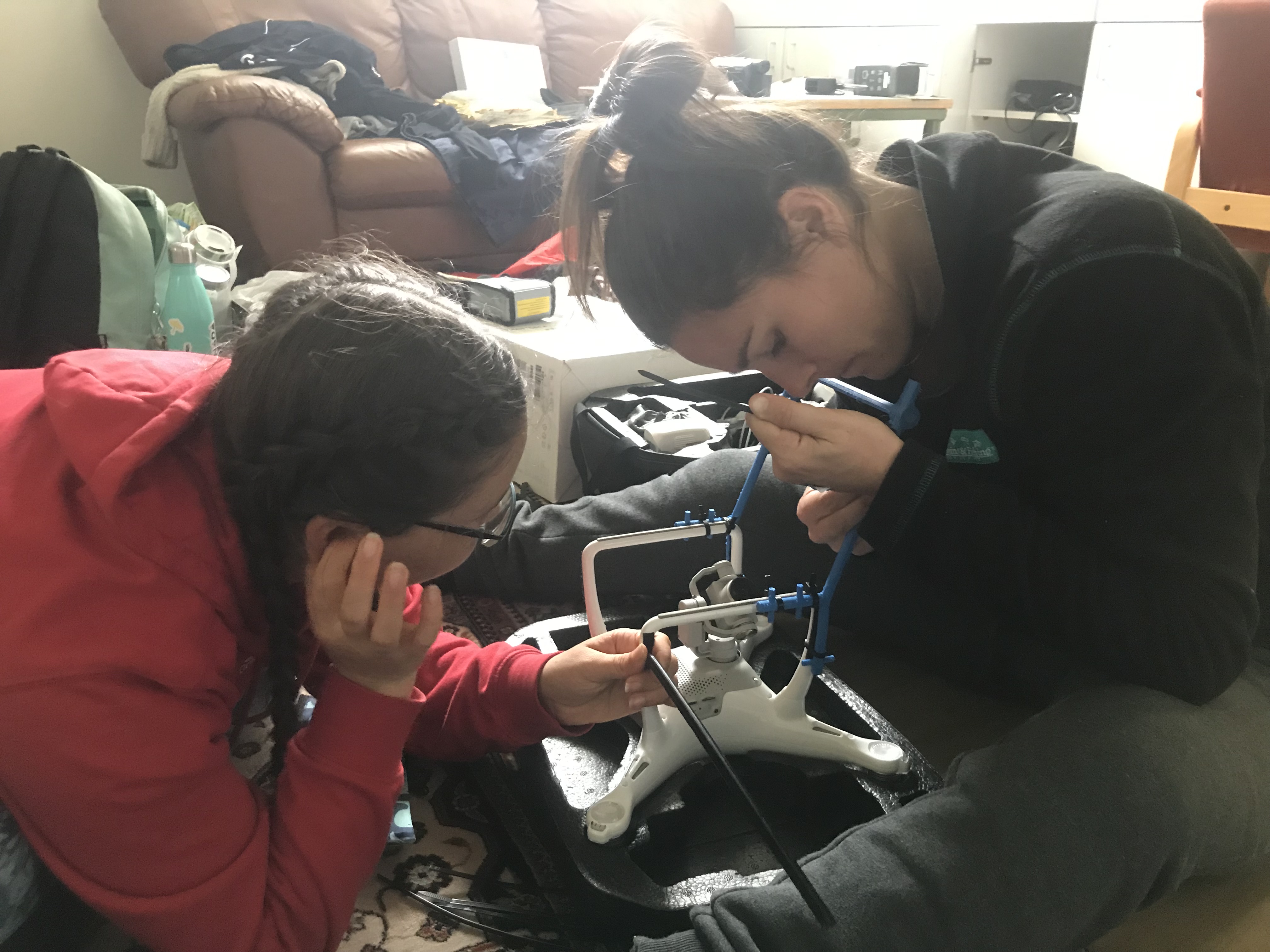 Success! The drone held steady, and Abigail found that it flies perfectly with the frame attached.

Our friends on board Barba, Andreas and Diane, were excited to hear we had the drone ready. Plans were made to head out on Saturday evening when the wind was predicted to drop off.

Saturday was Whale Day in Iceland! The day was created to give the Icelandic people an opportunity to learn about their amazing whales, and in turn grow a desire to protect them. The Whale Wise team set up a stall in front of the Húsavík Whale Museum with a small display to help engage tourists and locals, and answer any questions they may have about whales and our research. We had fun chatting with people and were glad to contribute to an important day.

We then headed out into Skjālfandi bay on Saturday evening aboard Barba. The crew on board was Andreas, Diane, Tom, Alyssa, Flordespina and Abigail. The conditions just got better and better. It wasn’t long until we were cruising under clear blue skies, over smooth glassy waters. Perfect for putting the drone up. 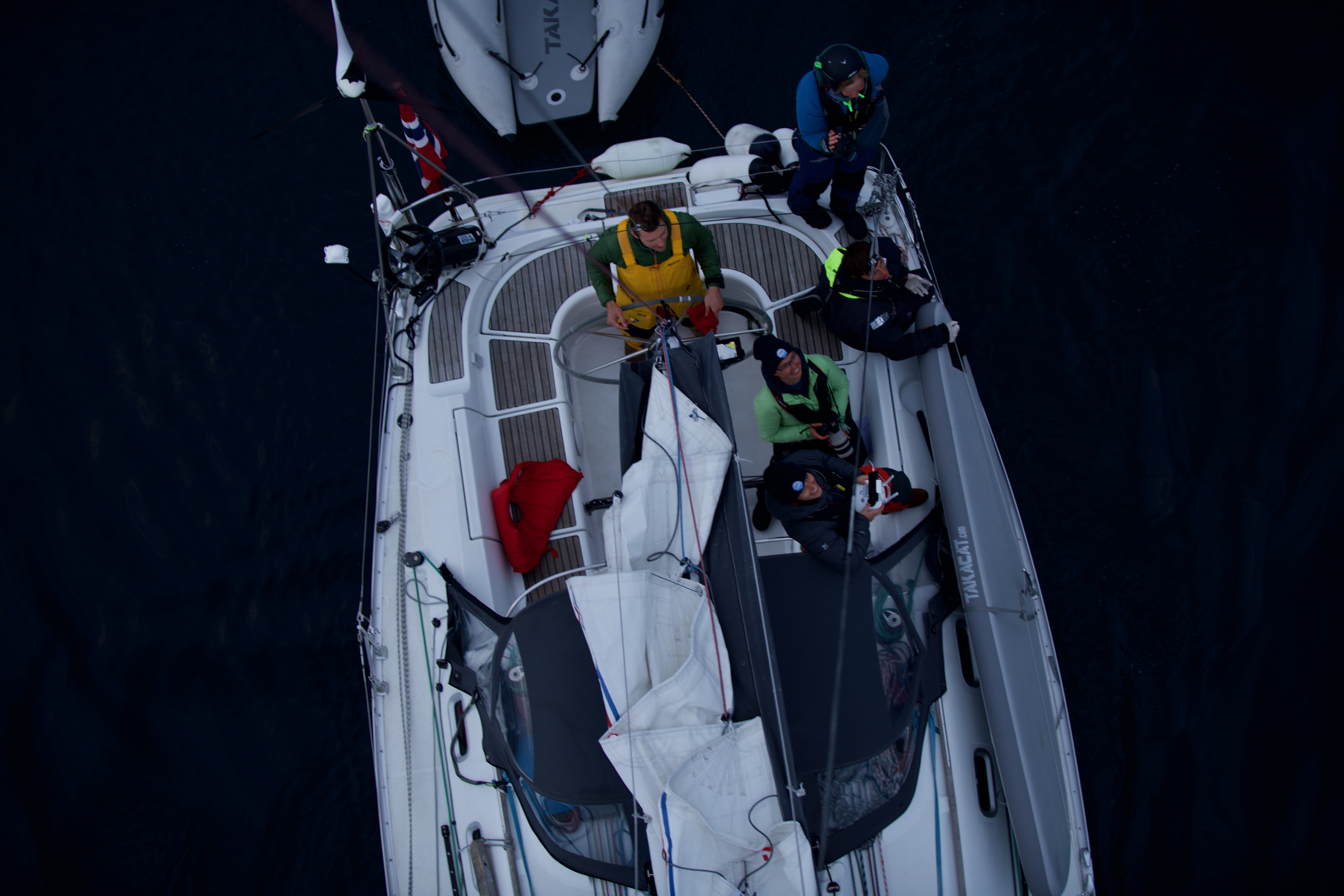 Andreas, Abigail, Flordespina, Tom and Alyssa on board Barba. Photo by Peter Svanberg.

Tom and Alyssa on the bow of Barba. Perfect conditions for drone sampling. Photo by Abigail.

Barba and her crew are a key part of the Arctic Whale Project. It has an overall focus of communicating the impact of plastic in the Arctic, using whales and animals as messengers. 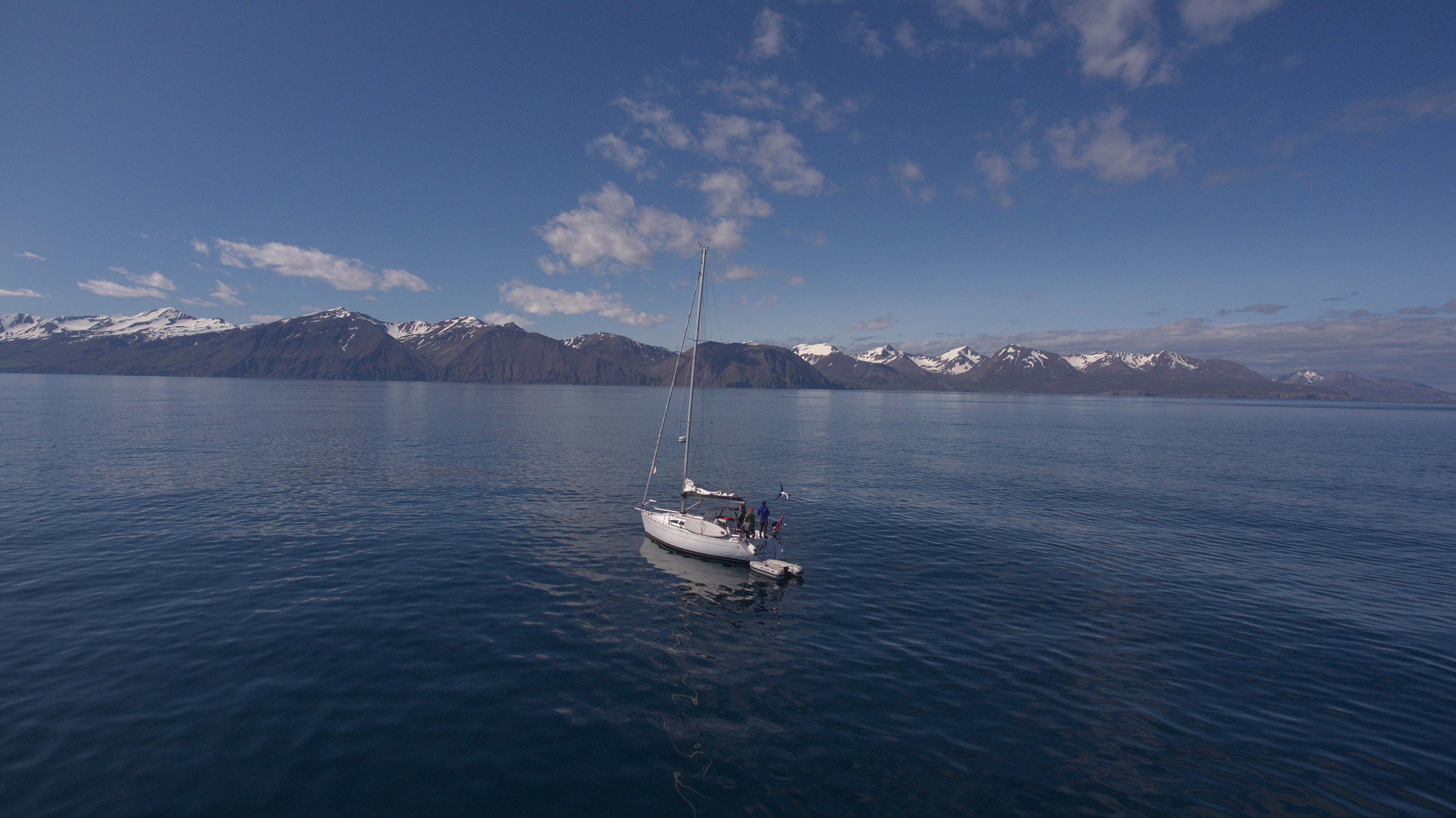 Barba and the team from the drone’s perspective while we waited for another surfacing from a humpback. Photo by Abigail

Part of the goal of our collaboration with them is to provide them with some blow samples for nano-plastic analysis, which we are more than happy to do. Finding novel, non-invasive ways to detect nano-plastics makes future research easier and more effective. Monitoring the presence of plastic contamination across organisms big and small is so important for conservation action.

With perfect conditions for operating the drone, we were soon able to collect our first blow sample for the season! This was very exciting for everyone on board, as we have all been working towards this moment. Safe to say that Abigail was the most relieved, as she had yet to prove she had the ability to collect the samples. Indeed she does!

Abigail, Alyssa and Tom in Barba’s cabin prepping the drone for its first sample collection of the season. Photo by Andreas B. Heide.

The drone swoops into the blow of a humpback whale, collecting mucus for analysis. Photo by Peter Svanberg.

The humpback we first sampled was one we had encountered earlier in the season and was easy to recognise from his white-tipped dorsal fin. Luckily his behaviour was reasonably predictable, and he lingered at the surface long enough to get the sample. 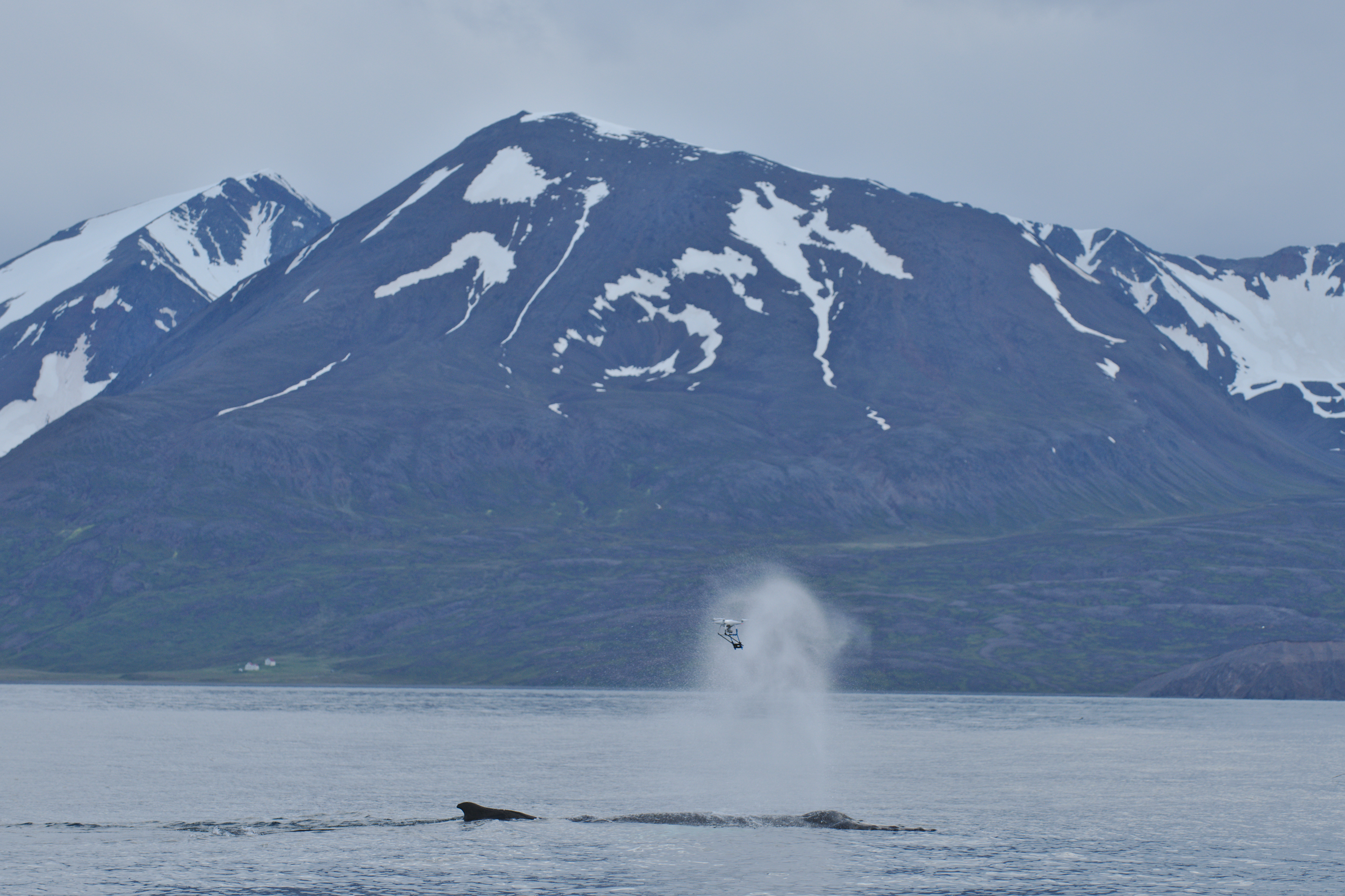 Another successful swoop into the blow of a humpback whale. Photo by Peter Svanberg. 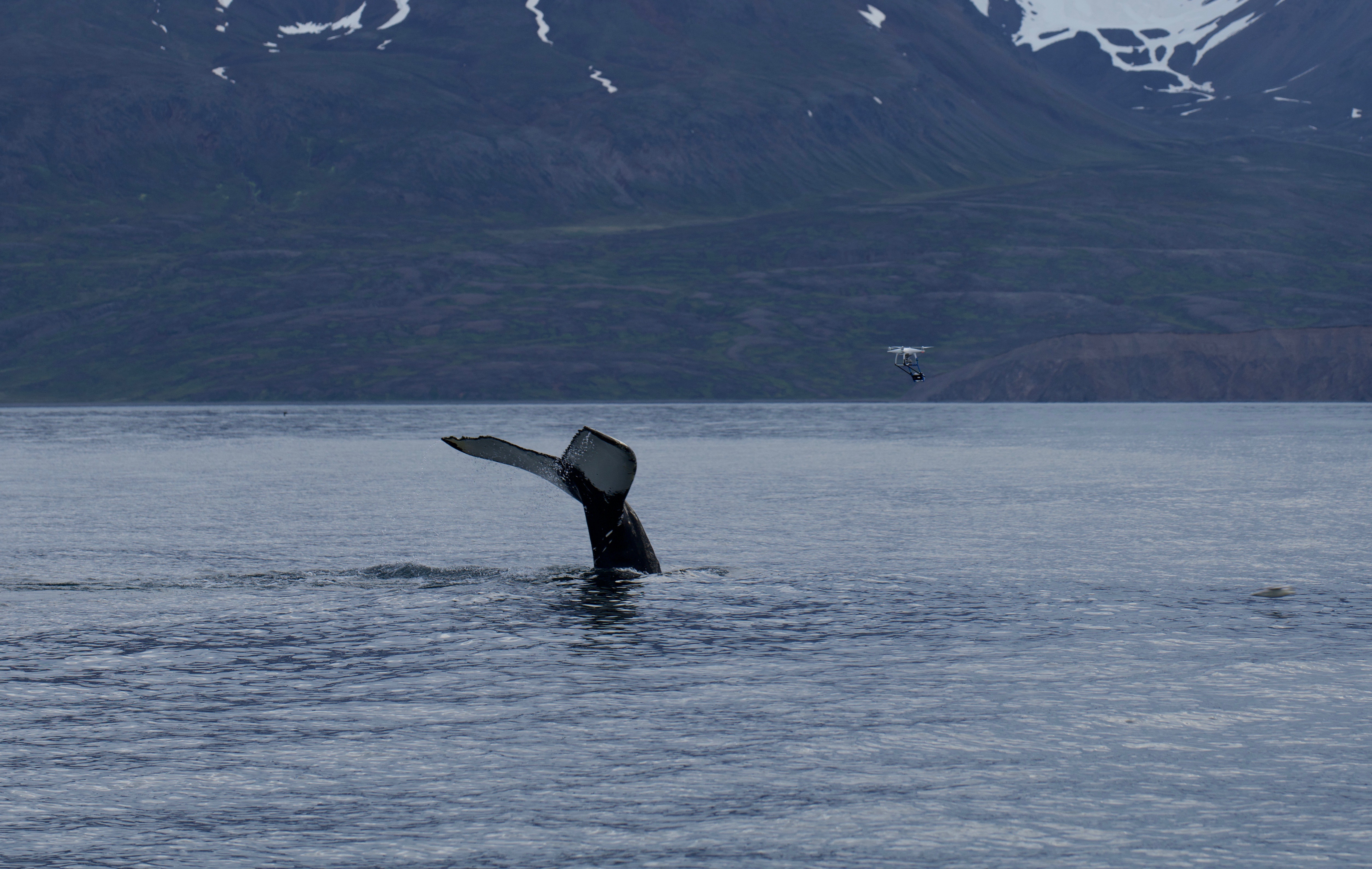 Not a moment too soon! We collected the sample on the whale’s last blow before it dived into the deep. Photo by Peter Svanberg. 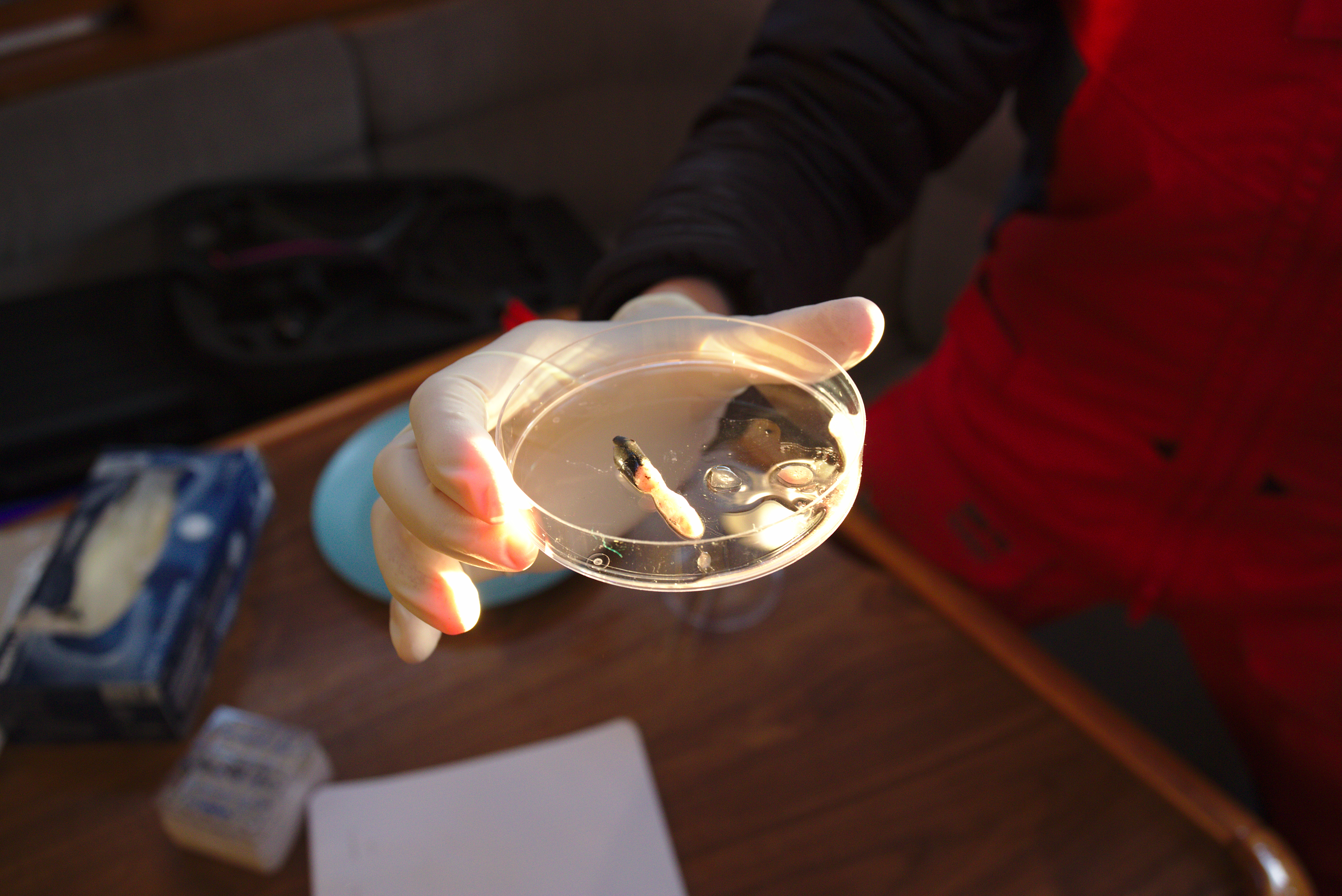 The tissue sample after Diane extracted it from the dart. Photo by Andreas B. Heide.

Diane preparing the tissue sample. Photo by Andreas B. Heide.

We called it a night and headed back to Húsavík in the very early hours of Sunday morning. The spectacular midnight sun provided a glorious backdrop that suited our elated mood after such a successful trip. It was home to bed for a few hours, then straight back out at 6 am to take full advantage of the amazing weather conditions. 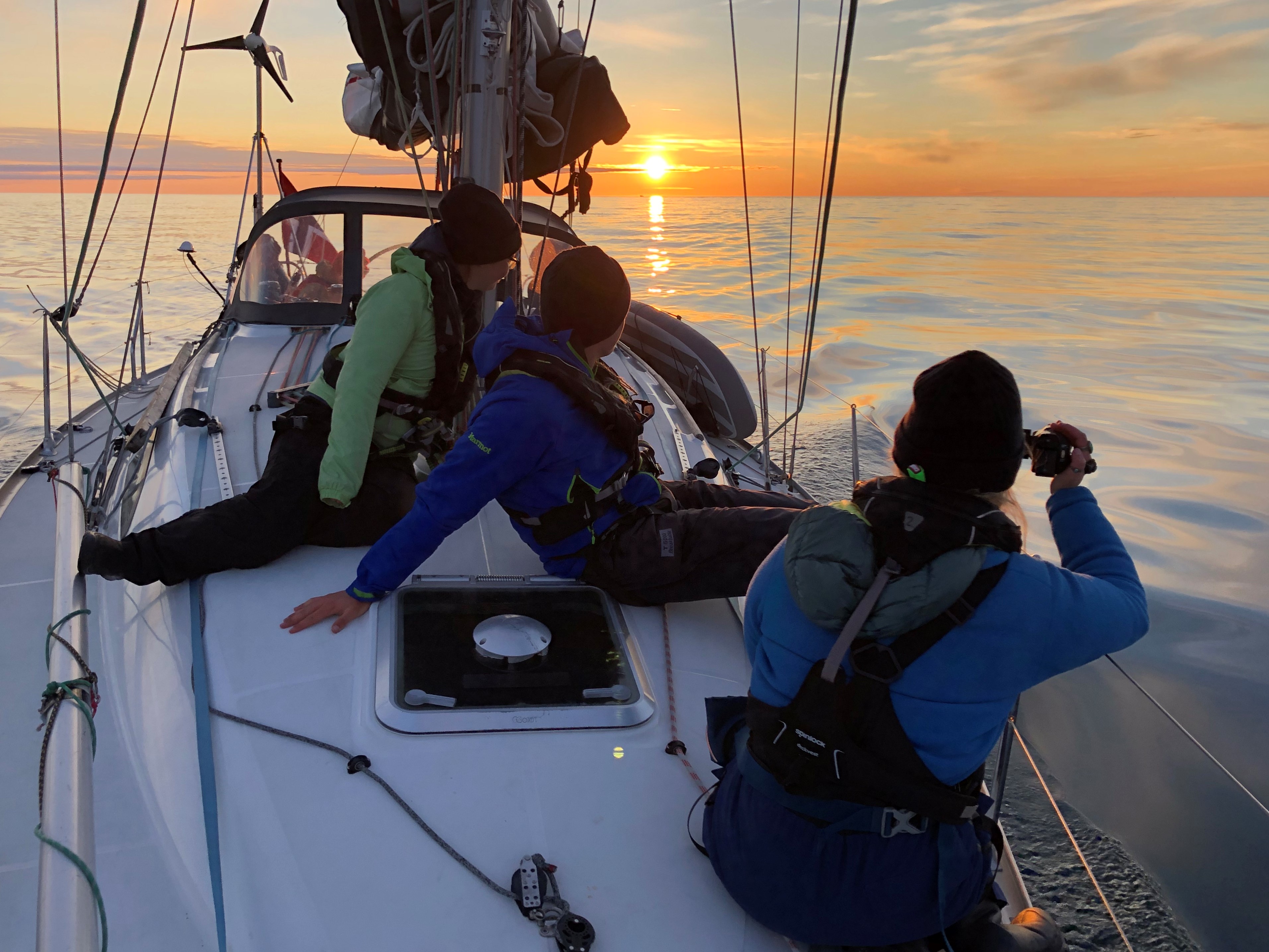 Amazing midnight sun as we cruised home for a quick sleep. Photo by Peter Svanberg.

The following day brought us more success. As a team, we collected a total of 5 blow samples, and 3 biopsy samples over the two days. We headed back to Húsavík around midnight again, exhausted, but very happy with our efforts.

One thing was missing from our trip. We hadn’t spotted a single blue whale. This was despite being out for 26 hours on the water, and travelling as far as Flatey (Flat Island) on the North West end of the bay.

However, we are hopeful we will have plenty of opportunities with blue whales in the coming weeks. For now we celebrate our wins, catch up on sleep, and crack on with the next task.

We cannot thank Barba and Arctic Whale enough for their support and enthusiasm over the weeks we have been able to spend with them. They are a force of nature with unbreakable spirits, and we have high hopes for their positive influence in the Arctic. We will miss them as they sail on to their next adventure. 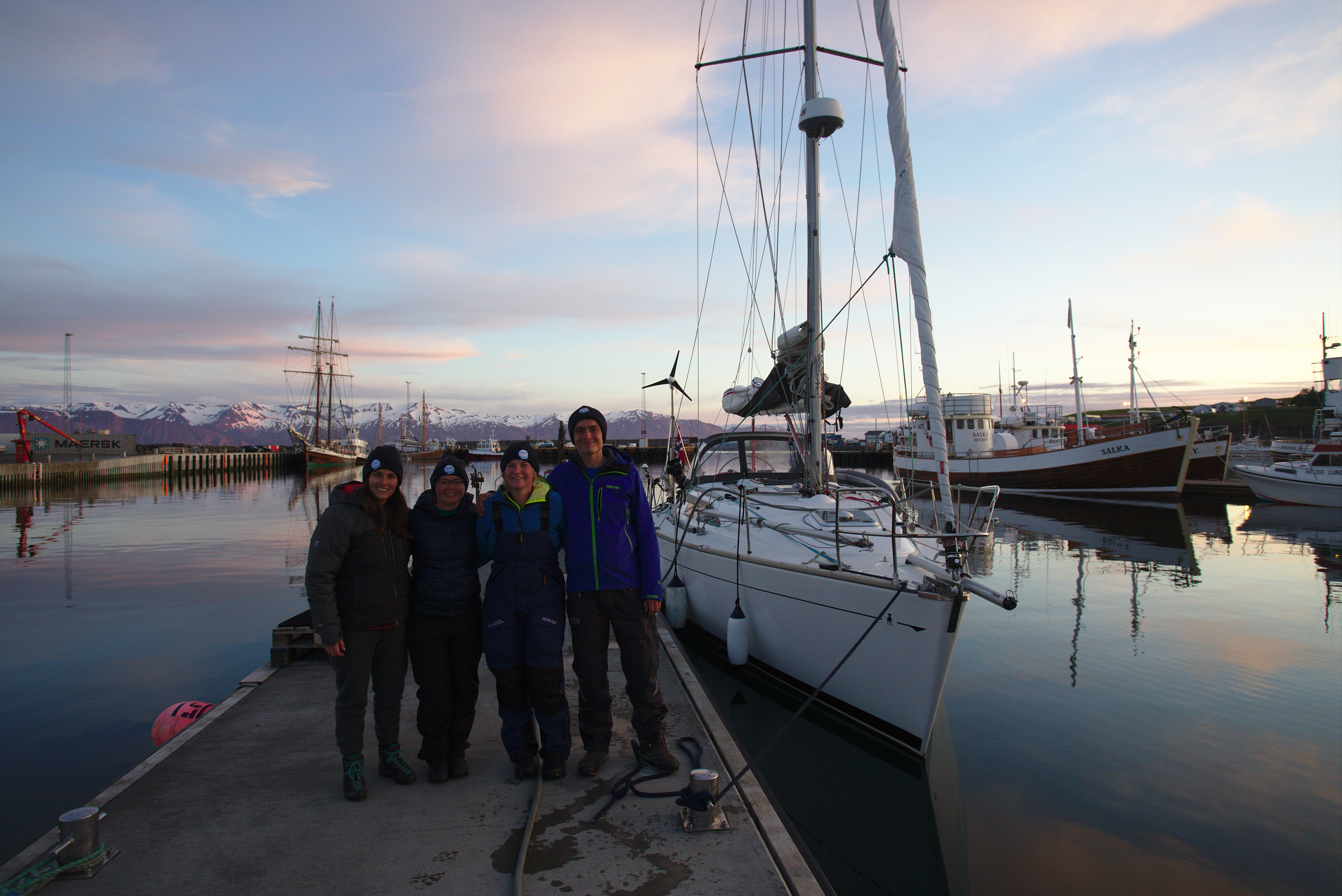