This season, we’ve decided to add a series of posts to our Whale Wise blog called ‘special memories’. These pages will be dedicated to events during our research that we will remember forever. We would love to share these times with you.

To start, Tom will describe an amazing few days spent on Barba, a Norwegian sailing vessel which is spending June in northern Iceland as part of the Arctic Whale project. Sometimes, you’re just lucky to be in the right place at the right time.

From June 10th – 12th, I joined Barba on a trip from Akureyri to Húsavík as a ‘scientific advisor’. Luckily for me, the crew was full of knowledge and experience, making my job easy! On board, we had Arctic Whale co-founders Andreas (captain) and Sandra, crew Diane, photographer Conor and myself. The aim of the trip was simple: find whales and show their beauty to the world (with some behavioural research on the side).

The trip started off on a decent note, with only a moderate northerly breeze as we travelled up Eyjafjörður, a narrow fjord leading from Akureyri. In the morning we spotted a few feeding humpbacks but left them alone due to the large number of vessels in the area. As the sea wind continued to pick up, we decided to moor at Hjalteyri, a tiny village with a dive centre, whale-watching boat and a very fluffy dog.

After a few hours’ rest and some quality time with the locals, we set off again to a different world. Glassy calm, bathed in evening sunshine and humpback whales everywhere- this was Iceland at its best. 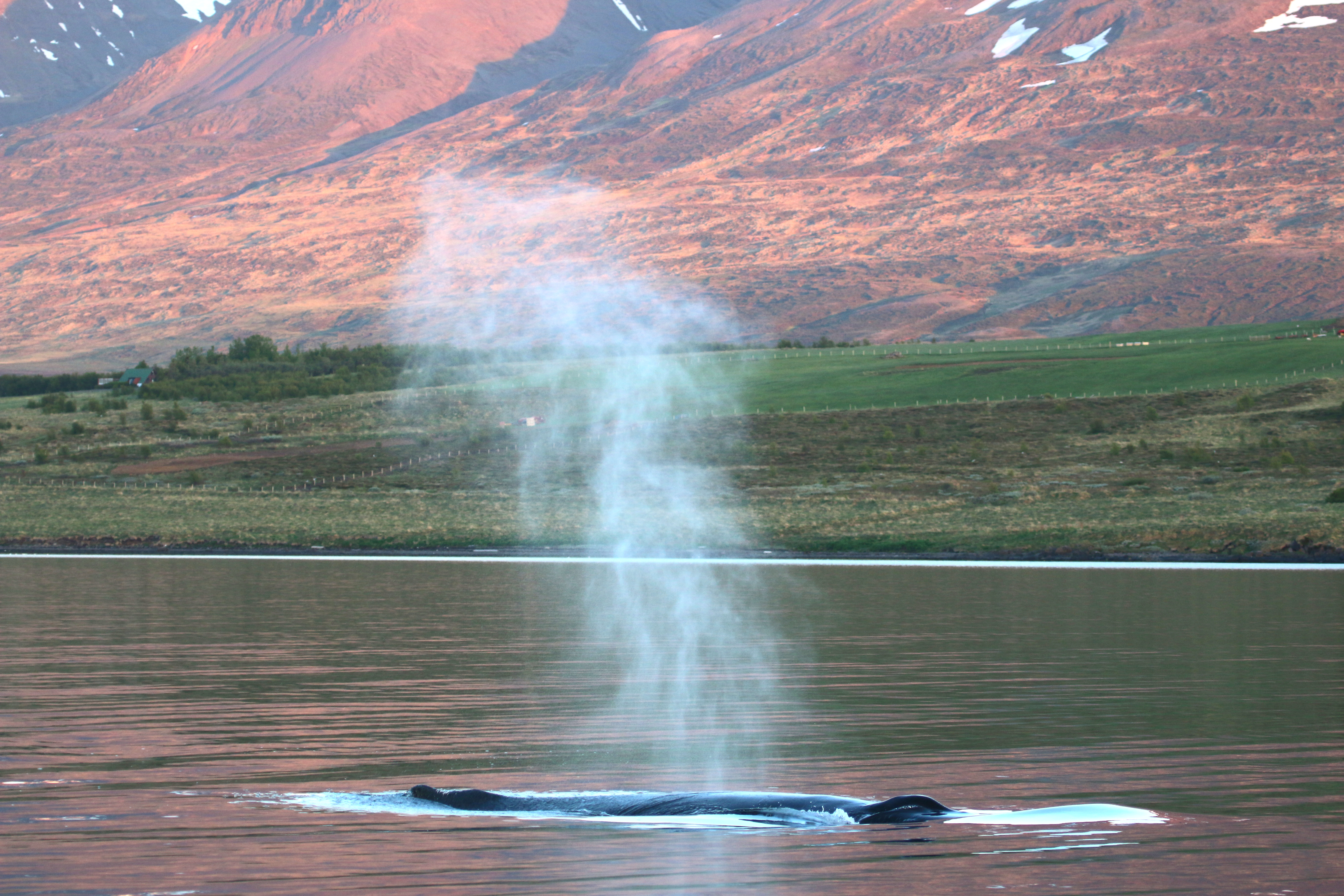 With the midnight sun setting the sky alight, we had entered the dream world.

Gathering our thoughts, and appreciating the magnificence of the moment, we realised that we needed to make the most of the situation. Bring out Barba’s paddle board.

A paddle board is the ideal vehicle for approaching whales- small, quiet and providing a platform close to the surface.

Of course, any vehicle approaching whales has the potential to cause stress or a change in behaviour. Fortunately, these whales continued to feed whilst the paddle board approached.

As morning broke (it never really left), we finally left the fjord and made our way to Flatey (Flat Island), a tiny island off Iceland’s north coast.

Full of birdlife and far from any mainland settlements, Flatey is the perfect escape from modern society. Instead of industry and people, on Flatey, you are greeted at the pier by puffins. Lots and lots of puffins. 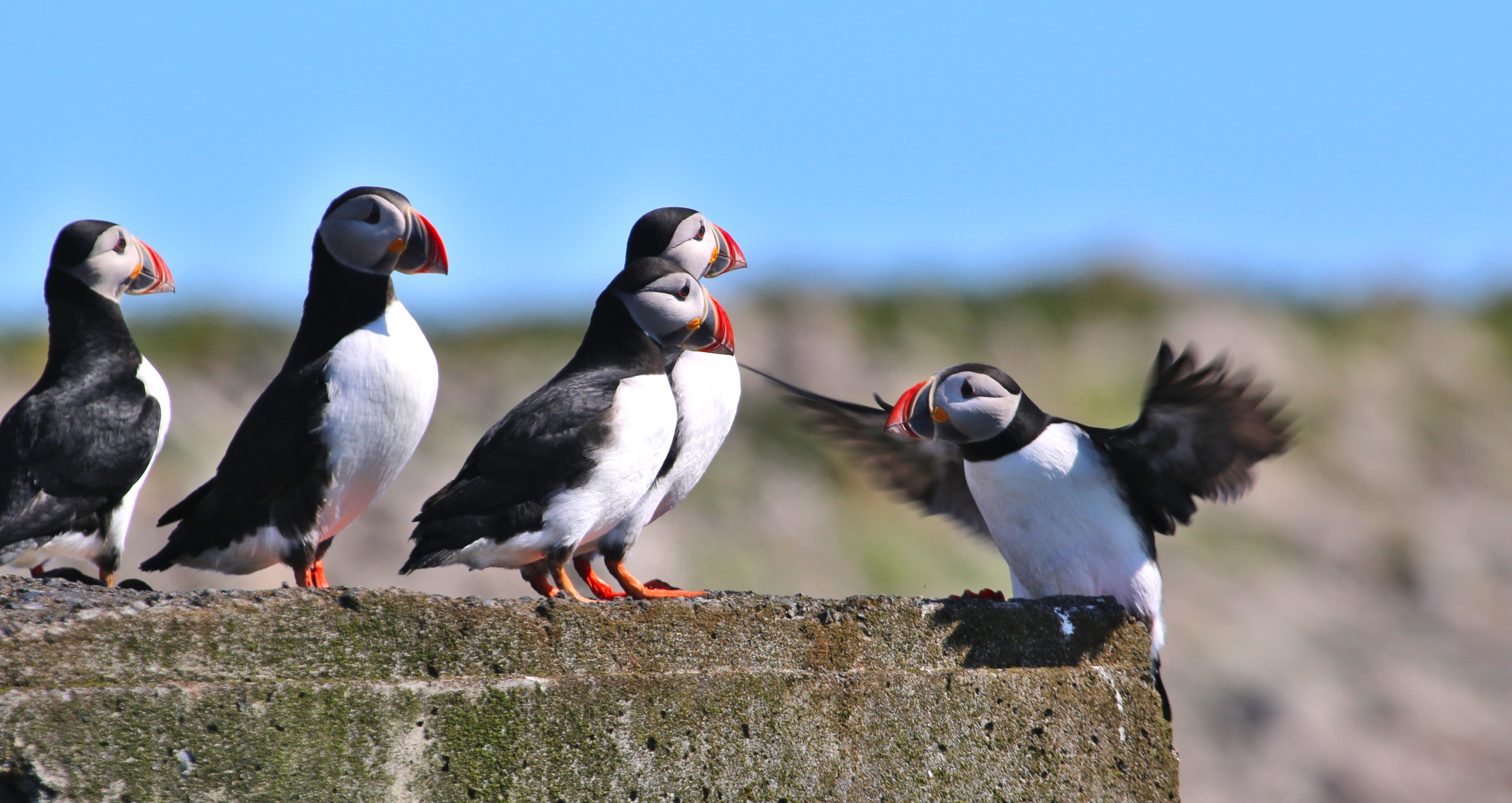 Spending a peaceful day on the island, we waited for the magic light of Icelandic summer night to blanket the bay. The search for leviathans then continued.

This time in Skjálfandi Bay- larger and more open than Eyjafjörður- we first encountered a beautiful pair of lunge-feeding humpbacks, making the most of the bay’s summer bounty of fish and krill. 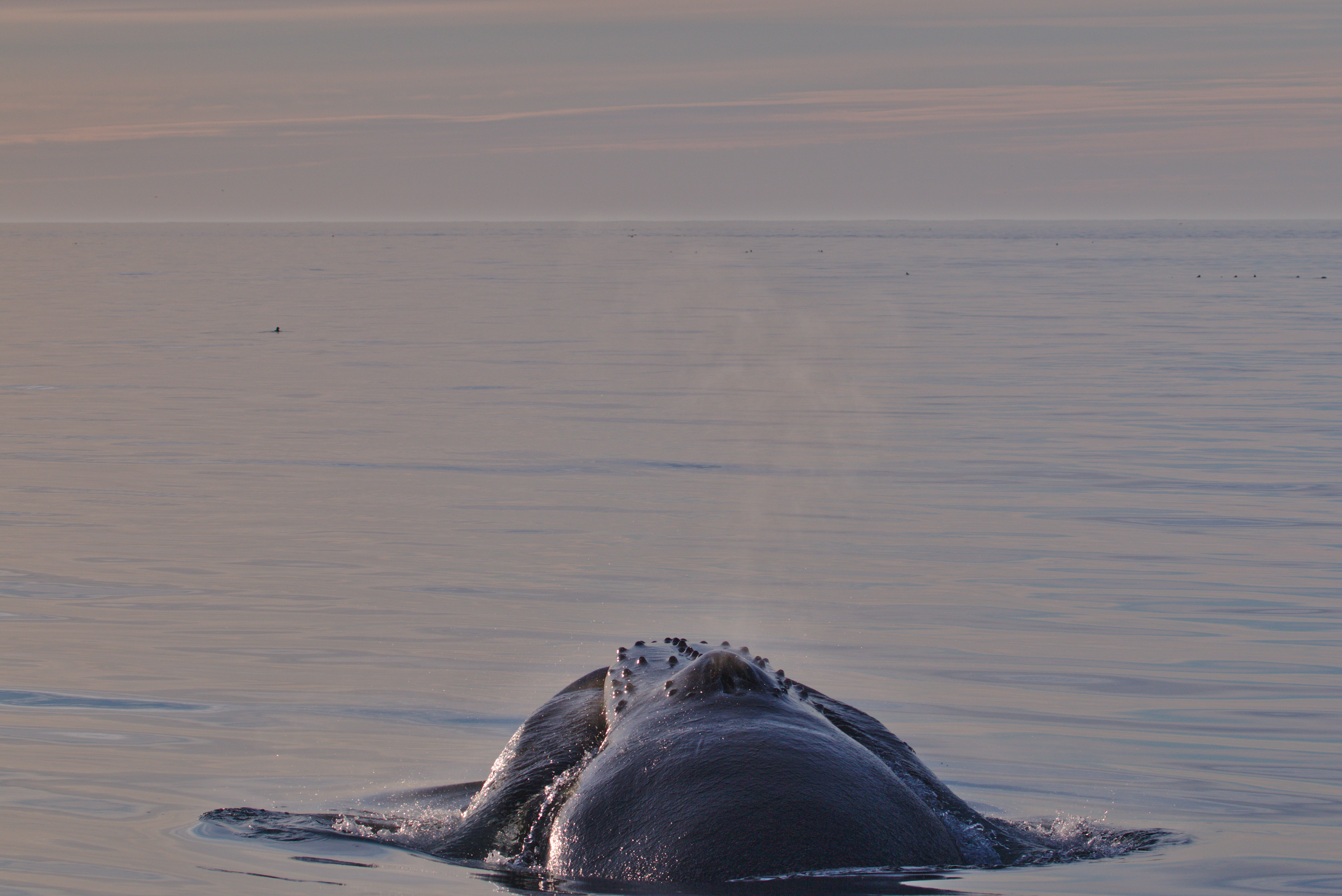 After leaving the humpies to continue their gorge, we came across a weird and wonderful animal- the hybrid. Famous in the bay as an annual summer visitor, the hybrid is a cross between a blue and a fin whale- with blue and grey patches, and an odd dorsal fin, it resembles neither. 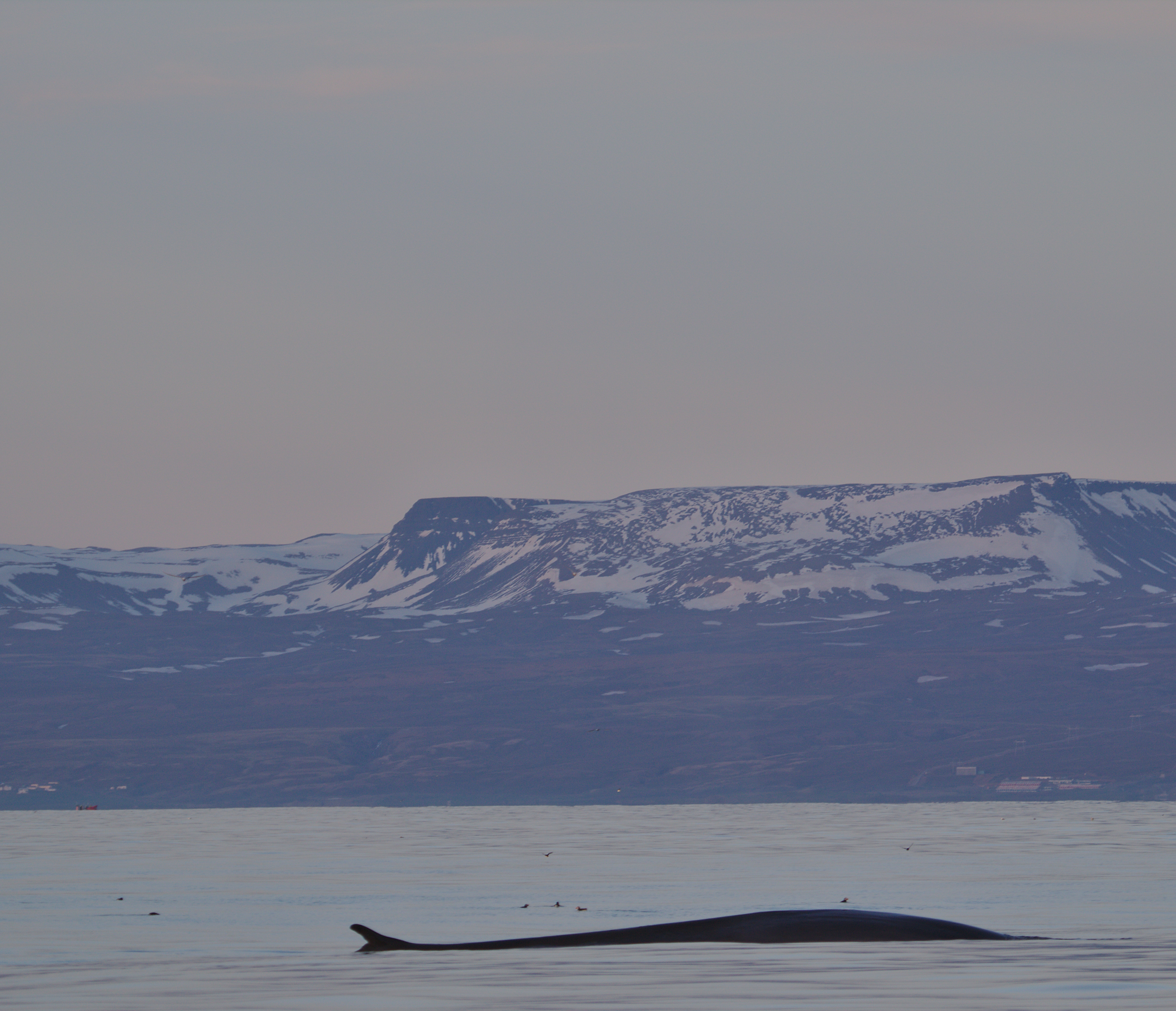 One thing, however, is certain- this is one of the largest and most special animals to roam our planet. 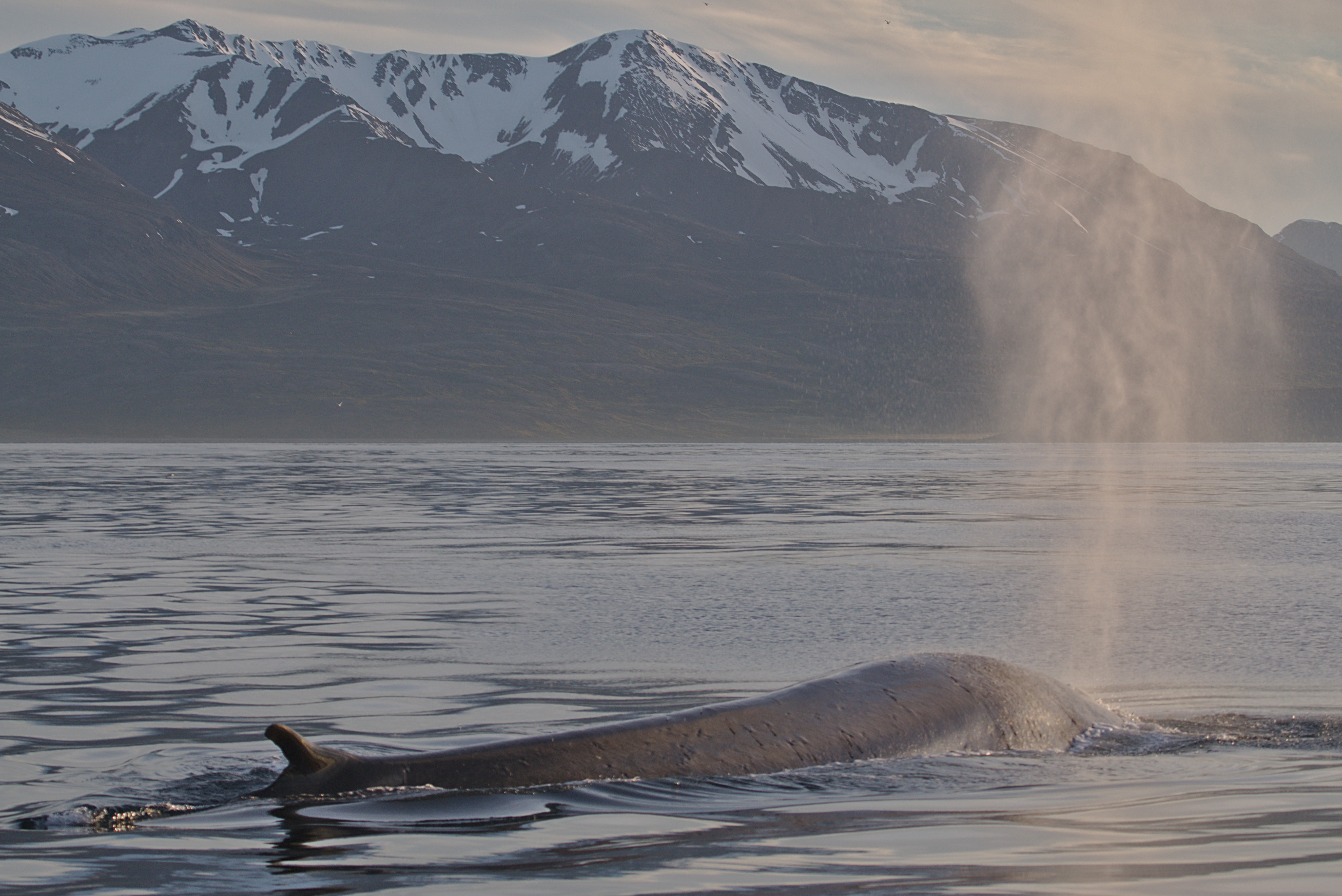 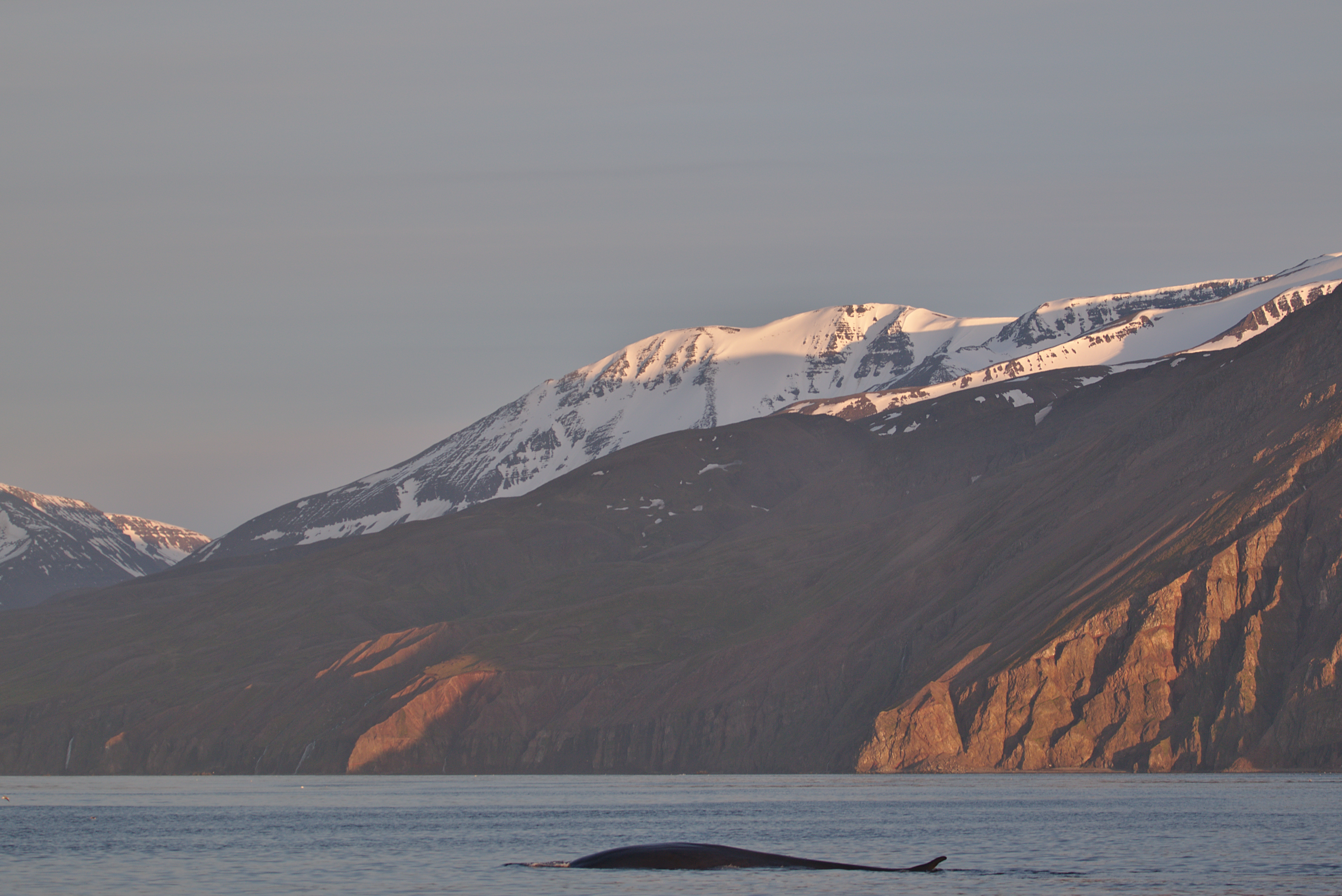 As the evening progressed, the surprises continued, including a pure blue whale and a mother-calf pair of humpbacks. Once again, the whales of Iceland had us all captivated.

With the night light giving way to glorious sunshine, we finally made our way to Húsavík harbour- but not before one last surprise. Making our way further into the bay, we encountered a large pod of possibly 50 white-beaked dolphins. Large and fully of energy, they were intent on both feeding on a school of fish and playing with the boat. With crystal clear waters, it almost felt as if we were in there with them.

A stunning end to a magical trip.

Thanks to the Arctic Whale team for an amazing experience. We realise that not everyone can witness these spectacles and are grateful for the opportunity.