A summer of strandings

For some species, summer 2018 has been a fantastic season in Skjálfandi Bay. For example, we have seen record numbers of humpback whales, with some incredible behaviour and several mother-calf pairs. However, for one rare visitor, the story of 2018 has been far more tragic. (the following blog does contain photos of dead whales)

The northern bottlenose whale (Hyperoodon ampullatus) belongs to the family of beaked whales and, like other species of their group, their ways remain largely a mystery. Due to their open ocean habitat and deep diving patterns, they are extremely difficult to study. Capable of diving to 2000 m and for up to 2 hours at once, the northern bottlenose and the details of its life have remained largely uncovered. Found throughout the North Atlantic, bottlenose whales eat fish, squid and even starfish, and actually feed by suction through their tube-shaped rostrum.

They spend most of their lives in social groups, feeding and travelling together. Like the well-known bottlenose dolphins, they have a fairly fluid social structure but appear to be capable of forming strong bonds between individuals.

Once abundant throughout their range, bottlenose whales were punished for their curious nature towards boats and attention to wounded members of their group, and were hunted to near-extinction in the 1900s. However, we know little about their current population status, since they rarely venture near to shore.

So, to encounter several pods at once in Skjálfandi Bay was quite the surprise.

An amazing photo of a breaching bottlenose whale. Credit to Etienne Menétrey

Sticking to the shallows

In late June, northern bottlenose whales were sighted in Skjálfandi Bay for the first time in six years. They have been spotted on a nearly daily basis since then, now reaching over 10 weeks spent in the bay. On some whale watching trips, we encountered more than 20 animals in the bay- almost unheard of in any part of their range, let alone in a coastal area. Moreover, these sightings were not restricted to Skjálfandi Bay, with northern bottlenose whales seen all around the east, north and west coasts of Iceland.

At first, they were behaving as you might expect from these whales- diving for a long time before surfacing far away. If you were lucky, they would surface next to your whale watching boat, providing some amazing encounters with a rarely-sighted species.

However, towards the end of July we started to notice a sudden change in behaviour. The groups started to move into shallower parts of the bay- in particular, they were consistently spotted in the south-west, near a large river mouth. They also started swimming in tight circles, breaching and tail slapping. Clearly, something had changed among the bottlenose.

Tragedy on the sand

At the end of July, tragedy struck when whale watching guides reported a whale struggling on the beach. Due to the inaccessible location, we were not able to reach the whale immediately, and within two hours it had sadly passed away. Once a whale strands, it suffers internal damage under the pressure of its own body weight. Its muscles start to breakdown, which ultimately leads to organ failure- therefore, two hours represents the maximum survival time once bottlenose whales have stranded on dry land.

Clearly, this was a very frustrating time for us. As a group of young researchers and students with very few resources, it was difficult to reach the whale and at least conduct some useful research. However, we were in luck with the chance meeting of a Belgian veterinarian, Thierry Jauniaux, a marine mammal specialist who happened to be in Iceland on holiday. Combined with a borrowed 4×4 car, we were able to reach the animal two days after the stranding to collect samples from the decomposing whale. We identified the animal as a large, adult female.

Following her death, the other whales continued to behave very strangely, still largely confined to the south-west corner of the bay. As a species of dynamic social structure, the loss of this female had obvious behavioural effects on her remaining group members. In particular, four smaller animals were constantly spotted swimming very close to the body’s location onshore. This led to a near-stranding event a few days later, involving four whales (likely the same four) getting stuck in the shallows while venturing near shore. Their struggle to free themselves from the shallow bottom was captured on film by an eyewitness, Axel Sigurðsson. Luckily, these animals made it back out to sea.

However, the behaviour sadly continued. The whales seemed confused and, from a human point of view, appeared to be grieving for their dead group member- the very trait that made whaling this species so successful and devastating. These four whales may even have been the offspring of the stranded female. Then, a few days later, three small females were found stranded on the same stretch of beach, unfortunately no longer alive. We suspect that they represent three of the four animals swimming close to the original stranding. This time, we were better prepared and were able to collect samples from all three animals.

After the Whale Wise team left Iceland a couple of weeks ago, researchers have continued to monitor the situation. Whales are still being sighted in the same area, and are potentially deteriorating in body condition, as individuals have been spotted with increased emaciation and skin discoloration. Earlier this week, another bottlenose was discovered stranded on a section of beach in the same area of the bay. The stranded individual was very young, not yet over 4 meters in length, and was too decomposed to allow sample collection. 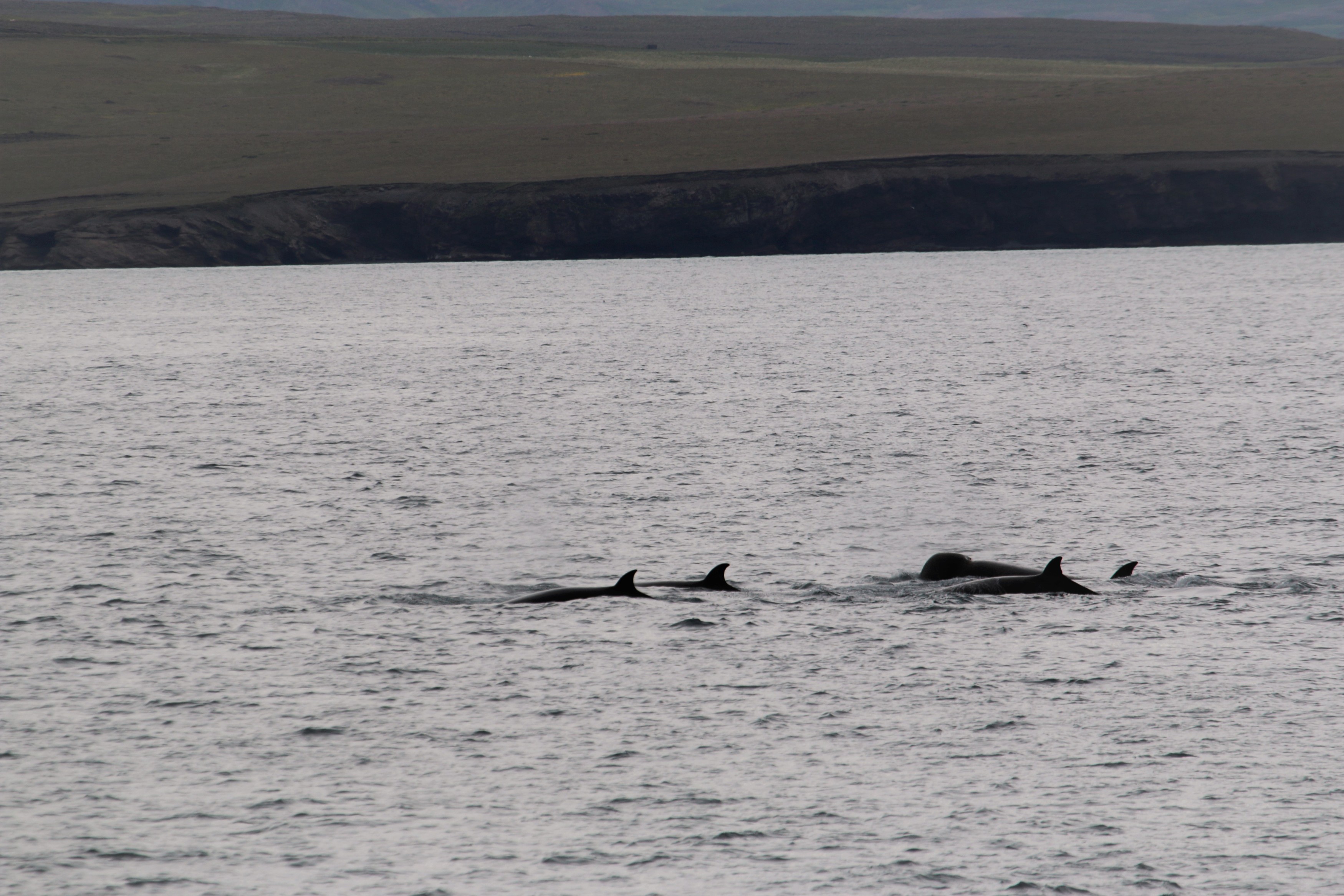 Three small females passed away on the beach. To know that we encountered these same whales swimming in the bay is heartbreaking

Taking measurements and samples from the deceased whales

The stranding events in Skjálfandi Bay are not isolated in 2018. Including the 5 fatalities within Skjálfandi, over 10 bottlenose whales have stranded around the coast of Iceland, with most resulting in death. This includes 2 individuals found stranded in Reykjavik, which rescuers boldly fought to save for many hours. Despite their best efforts, the bottlenose did not survive.

The strandings have not been limited to bottlenose whales, with various other species also stranding around Iceland. In particular, several Cuvier’s beaked whales (part of the same group as bottlenose whales) have stranded along the Icelandic coastline this summer.

Looking farther afield, whales in Iceland are not alone in their suffering. As of 7th of September, 58 whales have stranded off the coast of Scotland and Ireland since August, most of them beaked whales, like the Cuvier’s or True’s whale. (see this BBC article: https://www.bbc.co.uk/news/uk-scotland-highlands-islands-45446869).

Clearly, this is representing a crisis for the deep-diving whales in the northeast Atlantic. Before we consider prevention, we first need to consider the cause.

These animals can be affected by so many changes in their underwater environment that it is hard to decipher a single cause. Strandings can occur for any number of reasons. Anything from illness, changing sea conditions, unfamiliar location, noise pollution, entanglement, or many others could lead a whale to strand. However, we do think that this unprecedented period of activity might have been linked to human disturbance.

On the first day that bottlenose whales were spotted in Skjálfandi Bay, a large naval exercise commenced off the coast of Scandinavia. Of the whales that have been studied, northern bottlenose whales are perhaps the most sensitive species to sonar, responding by moving quickly straight away from the sound source. From the approximate ocean location of the bottlenose at this time of year, this naval exercise is a very possible factor in these stranding events, but we cannot say that was definitely the cause. Similarly, these underwater military tests seem to correlate with strandings around the British Isles.

Whales, and beaked whales in particular, are incredibly acoustically oriented animals. Sound is a way of navigation, communication, feeding, and so much more. Noise pollution, especially with regards to naval sonar, has been discovered to have serious detrimental effects on cetaceans. In March of 2000, nearly 20 whales suddenly stranded in the Bahamas, and many of them exhibited damage and bleeding from their ears. The following study of the event concluded sonar as the culprit of many of these animals’ deaths. The US military later admitted their discovery that a naval exercise they performed in the area the day prior to the strandings was indeed the cause of their deaths. While not all cases of sonar result in such drastic internal damage, shifts in behaviour to avoid such sound sources can be just as dangerous to whales.

As this behaviour continues amongst the bottlenose in Skjálfandi, and with the number of strandings rising, it is also possible that this sonar caused internal damage to the hearing of these whales. Depending on the extent, this potential damage could inhibit feeding, leading to slow starvation and eventual death. Even the simple behavioural shift exhibited in bottlenose to avoid sonar sources could explain their rare presence around the shallow coastal waters of Iceland this summer.

Whilst it is undoubtedly very sad that humans might have caused this tragedy, it also provides hope: we can stop unnecessary deaths in the future. We have collected samples from the whales and, in collaboration with other research groups, will conduct analysis of these samples. Hopefully this will give more concrete clues as to what happened and how it could have been prevented.

We would like to thank everybody who has helped us to study these whales over the last few months: fellow researchers, whale watching guides and locals. We couldn’t have documented these events without you. There is still much mystery surrounding beaked whales like the bottlenose, and their interaction with humans within the ocean, but we can seize this opportunity to learn more.

Together, we can uncover key pieces in the unknown lives of whales.

Together, we can discover the role that we humans play in ocean ecosystems.

Together, we can help to save lives.

If you have any questions about these stranding events, please feel free to email info@whalewise.org, contact our social media pages (@whalewise) or comment on this blog.

← Success in the field
Lab work for whales →